WARM SPINACH ARTICHOKE DIP IS A HIT AROUND THE TABLE!  TOPPED WITH CRISPY BACON, WHAT’S NOT TO LOVE!

There’s spinach and artichoke dip, then there’s Spinach BACON Artichoke Dip. Hot Spinach Artichoke Dip with crispy bacon pieces is so easy! Made with just a handful of ingredients and ready in less than 30 minutes, this spinach bacon artichoke dip is a favourite! 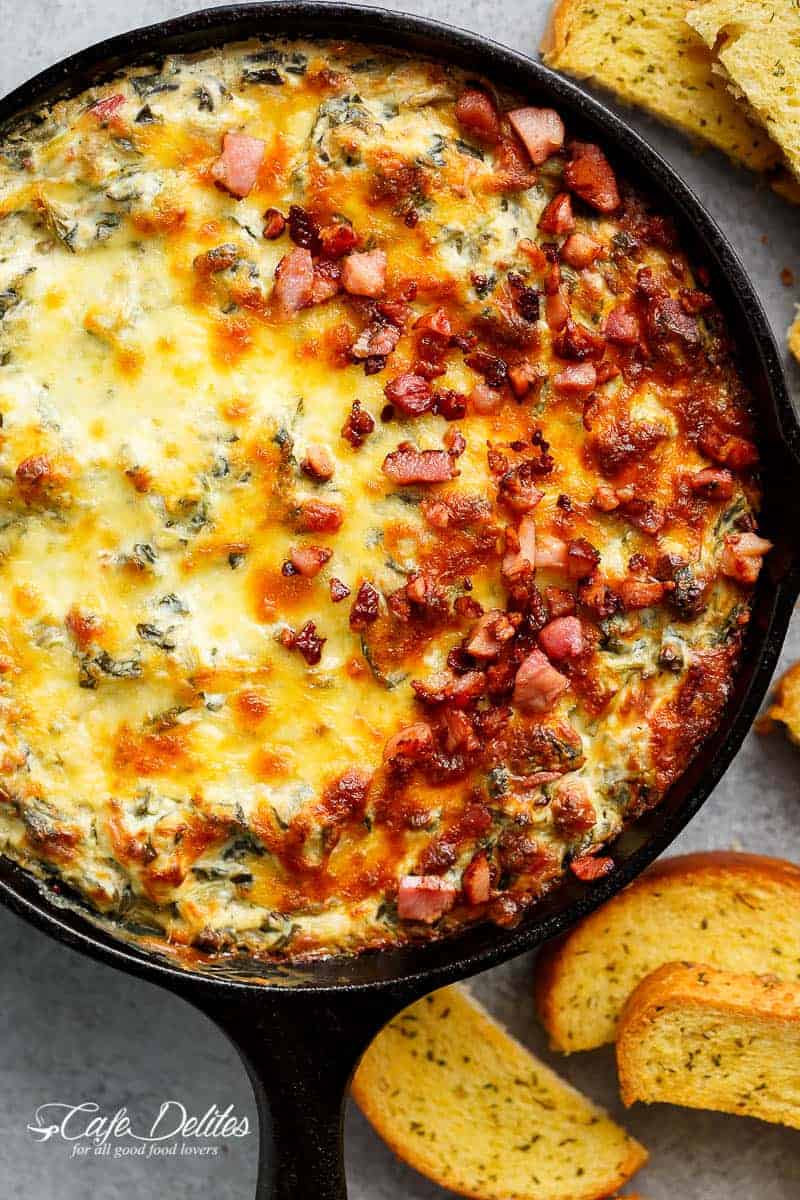 SO MUCH FLAVOUR, it hurts to look at it and not have it in front of me.

As if this Spinach Artichoke Dip Stuffed Chicken isn’t enough, I had to pull out the chicken part and add in the bacon pieces to satisfy a huge craving happening in my kitchen. 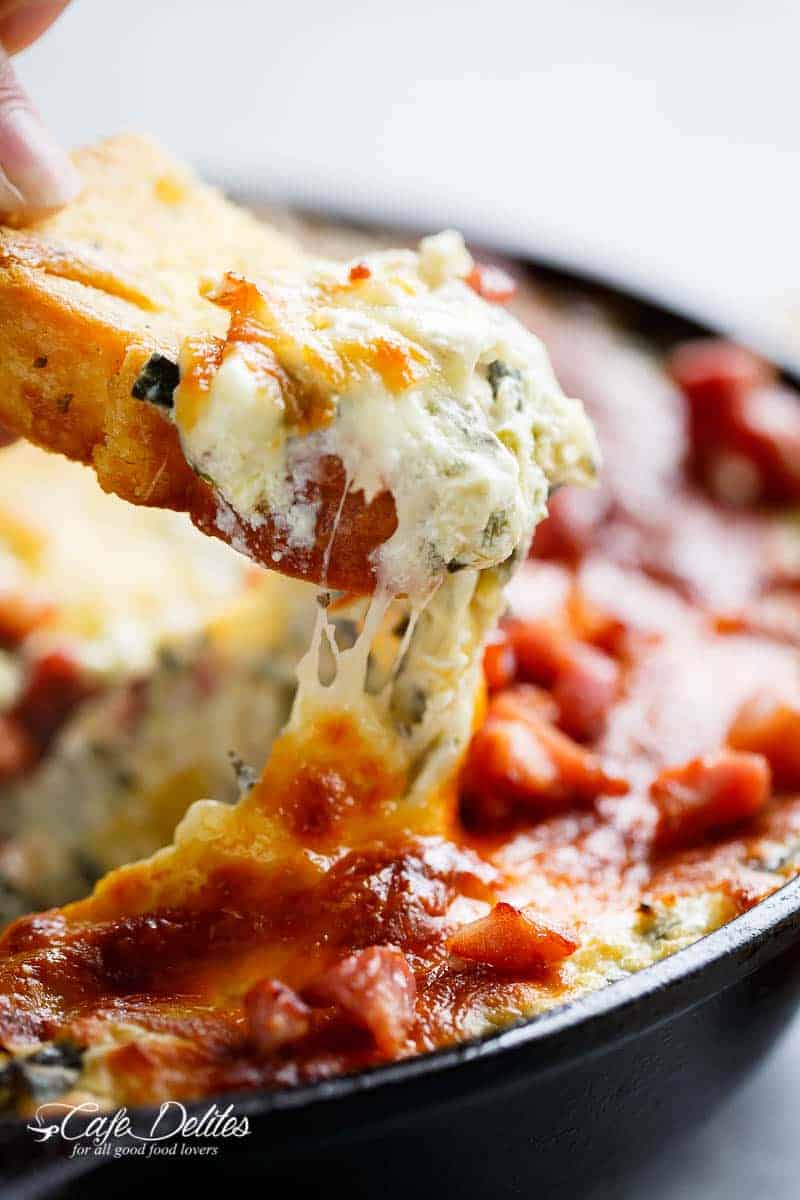 WHAT GOES IN SPINACH ARTICHOKE DIP

There’s so much happening in this skillet in the form of:

HOW DO YOU MAKE SPINACH ARTICHOKE DIP?

Bacon is first fried in the skillet, coating it in all the flavour, before the dip is mixed through said flavour and baked in the oven with Mozzarella and parmesan slowly melting on top, filling your kitchen with amazing aromas.

We also add in garlic to give us even more flavour.

Top with extra crispy bacon to ensure plenty of bacon with each and every mouth watering bite! 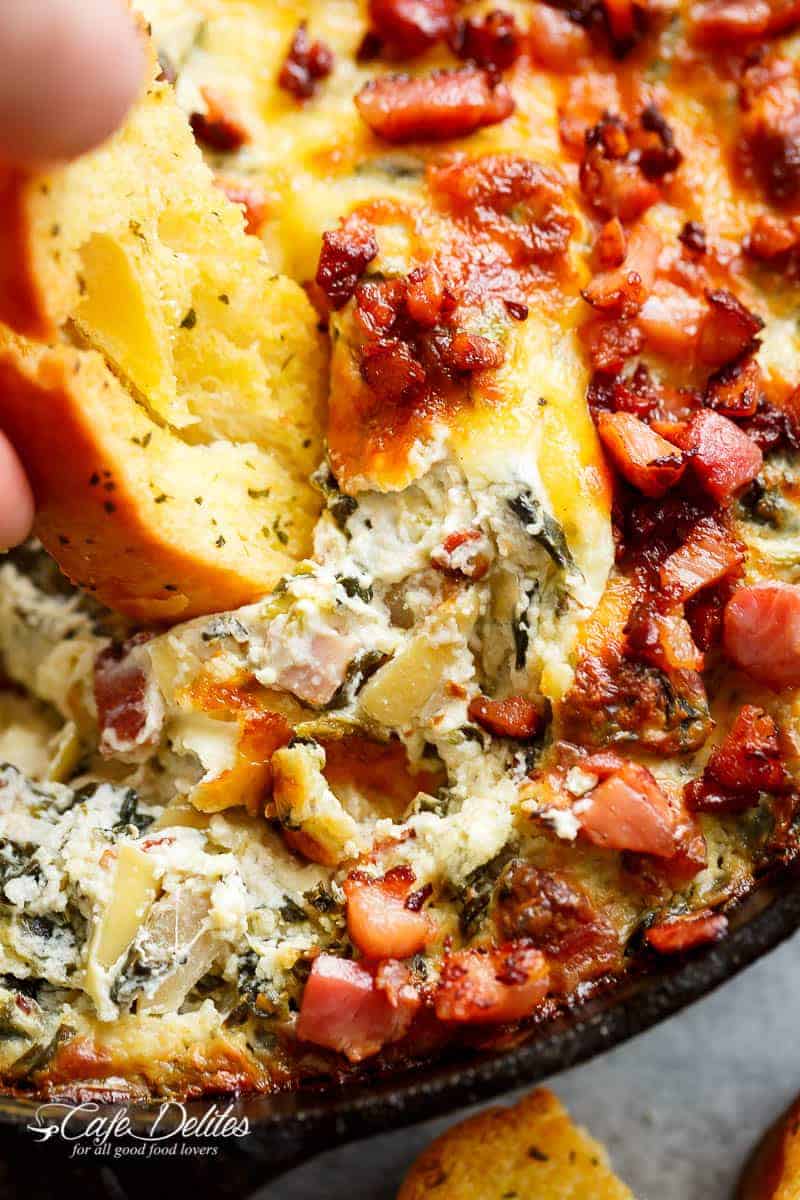 I placed this skillet in the middle of our dinner table, and to say it was gone in 5 minutes is a severe understatement — no exaggeration. PLUS crispy garlic bread to serve it with, because WHO doesn’t love garlic bread? This was lunch for three days after. I mean, remaking it, because forget any possibility of leftovers. What are leftovers?

You could also serve it with THIS cheesy garlic bread! 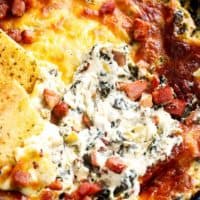 Warm Spinach Bacon Artichoke Dip is a hit around the table! Topped with crispy bacon, what's not to love!
PRINT SAVE go to your favorites
Prep: 5 mins
Cook: 15 mins
Total: 35 mins
Serves: 24 people (as a dip)