A luxuriously smooth, rich and creamy Eggnog = Christmas in a cup! Like nothing out of a carton, you will never buy store-bought eggnog again!

Our classic creamy Eggnog recipe has taken years to perfect and now we’re finally sharing it with you all! A sinful seasonal treat with a little effort, it’s well worth the work. The best part? It just gets richer and creamier as it sits in the refrigerator.

Use rum, bourbon, cognac, brandy, or your choice of liquor. Add more or less to suit YOU! 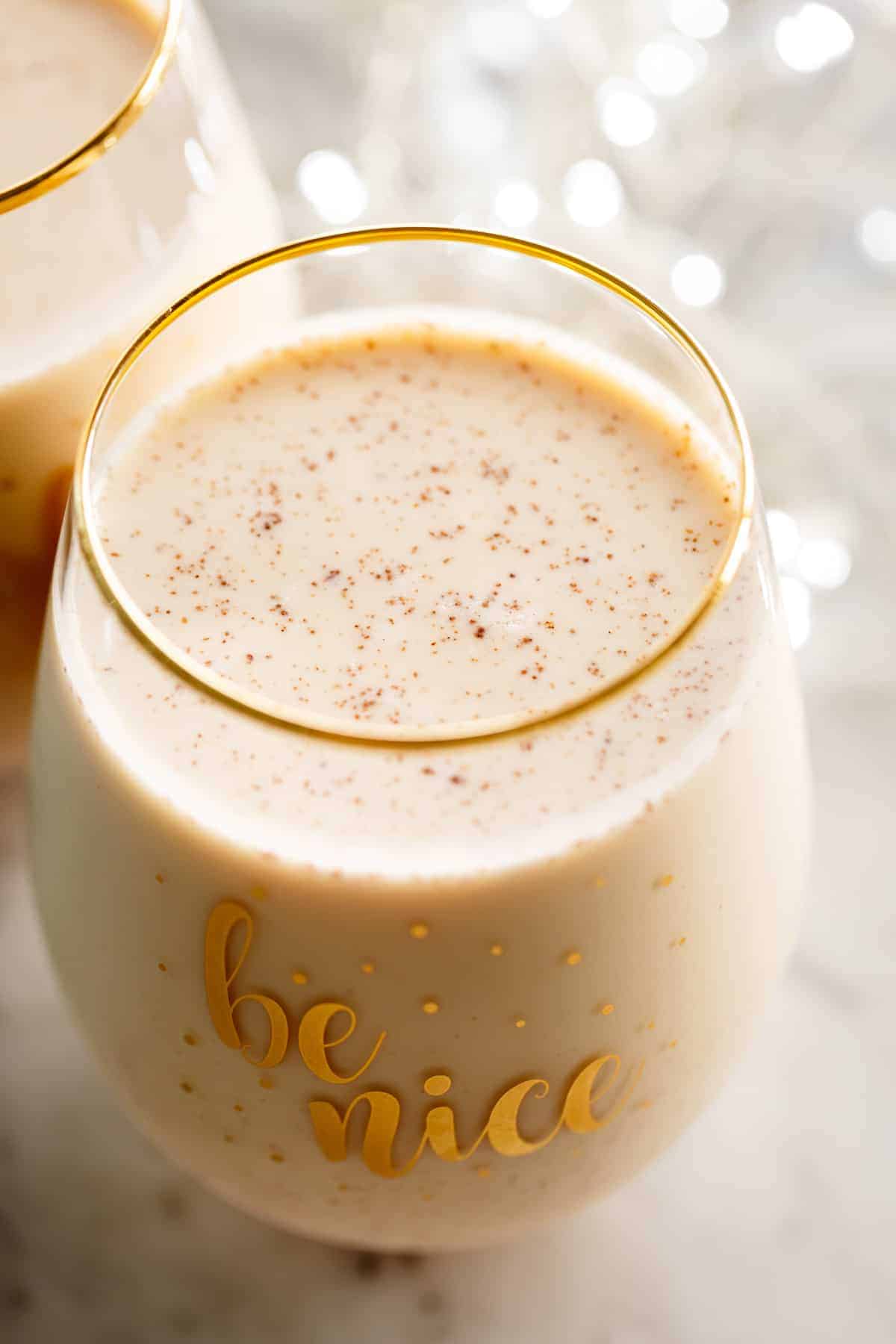 This holiday season, skip additive-laden cartons of pre-made eggnog and make fresh and creamy eggnog from scratch! This stuff is incredibly addicting and couldn’t be easier to make. You just need eggs, sugar, milk, heavy cream (or thickened cream) and have creamy eggnog whenever and with whoever you want! That is…if you’re in the mood to share.

Sine the FDA and USDA recommend we cook pasteurized eggs when making Eggnog at home, this recipe does that for your safety.

Additionally, eggnog is normally aged with liquor for several weeks or even months in advance, which may sound crazy BUT the alcohol becomes the sterilizer and preservative. Very few bacteria (like salmonella), can survive in the presence of alcohol, as has been proven in lab experiments at Rockefeller University. It won’t kill them ALL, but it doesn kill some, according to ABC news. 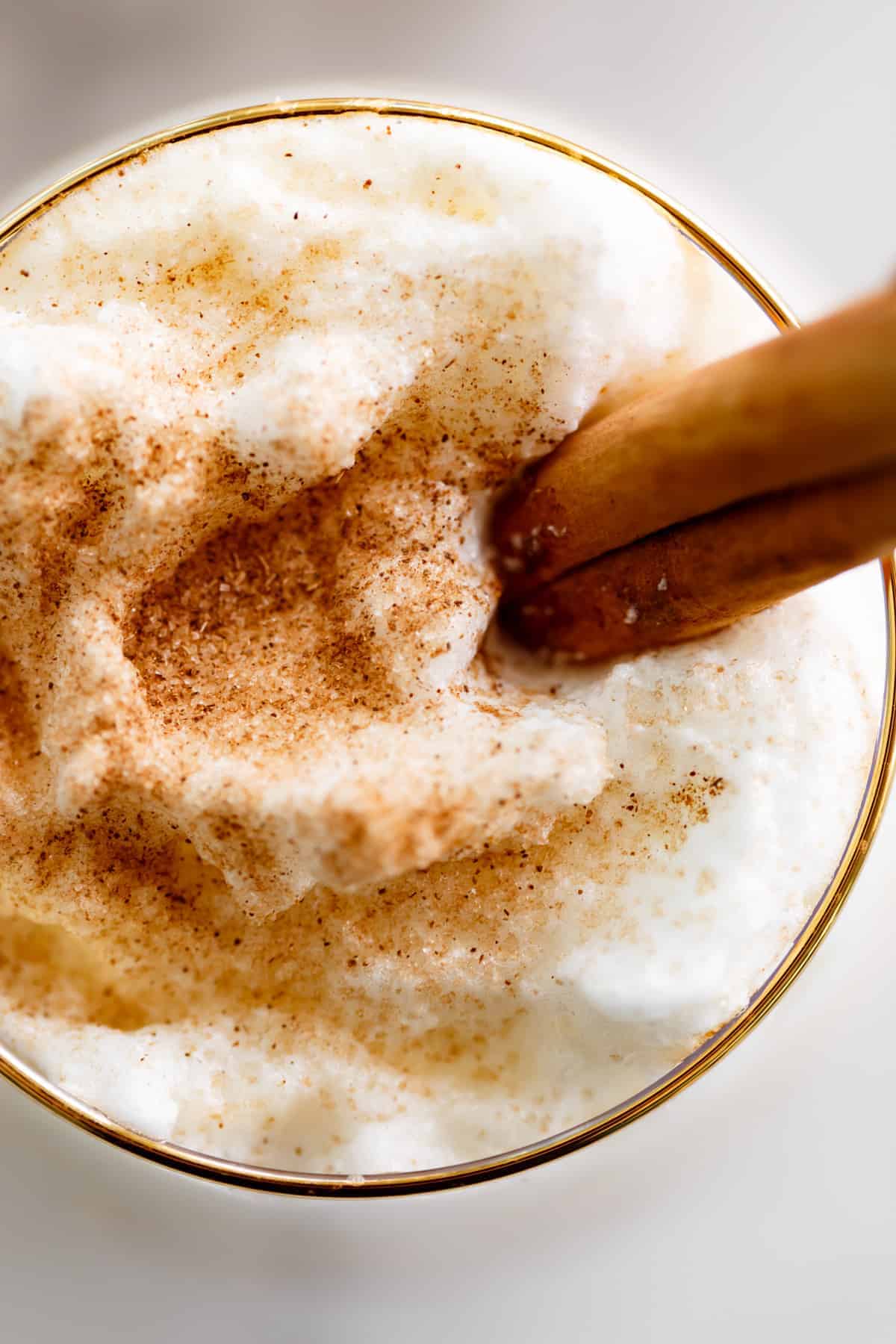 HOW TO MAKE CREAMY EGGNOG FROM SCRATCH

GENTLY BOIL: Milk, cream, vanilla, cinnamon and nutmeg. Remove from heat once boiled and let steep.
BEAT: egg yolks and sugar until thick (takes about 5 minutes. This helps prevent the eggs from curdling. You may want to use a hand mixer).
WHISK: hot milk mixture into the eggs. Do this slowly and in 1/2 cup increments to prevent eggs from scrambling, until liquid is well combined and smooth. Mix in your liquor.
COOK: one more time over low-medium heat, while stirring, for 2-3 minutes until nice and thick! Be careful not to bring it to a boil.
REFRIGERATE: overnight or for up to 3 days.
SERVE: with ground cinnamon, cinnamon sugar or fresh grated nutmeg. 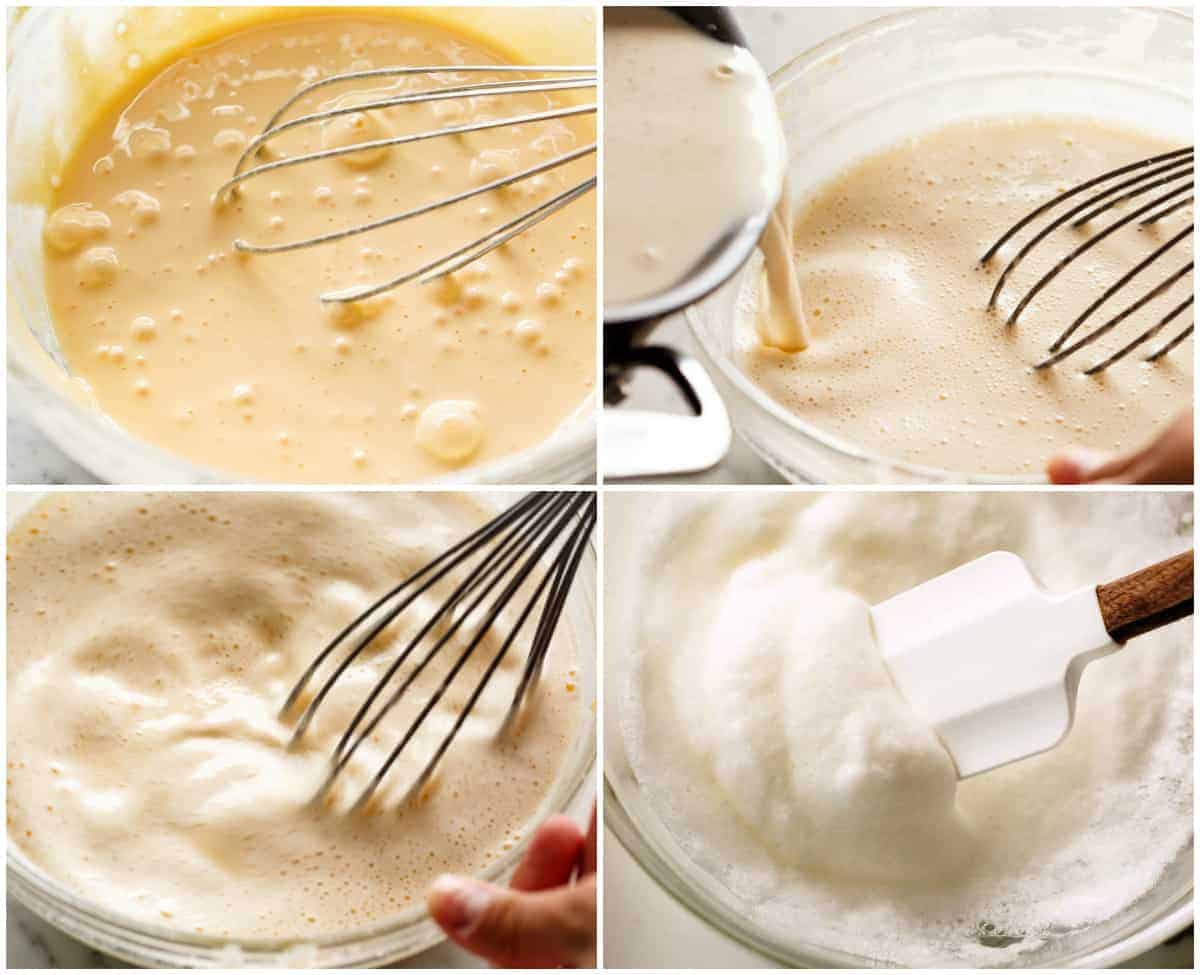 Beat egg whites until soft peaks form and gently fold into eggnog until combined. This step makes for an even thicker and creamy eggnog. If you don’t want to consume the raw egg whites, simply whip some cream to top your eggnog OR enjoy without! 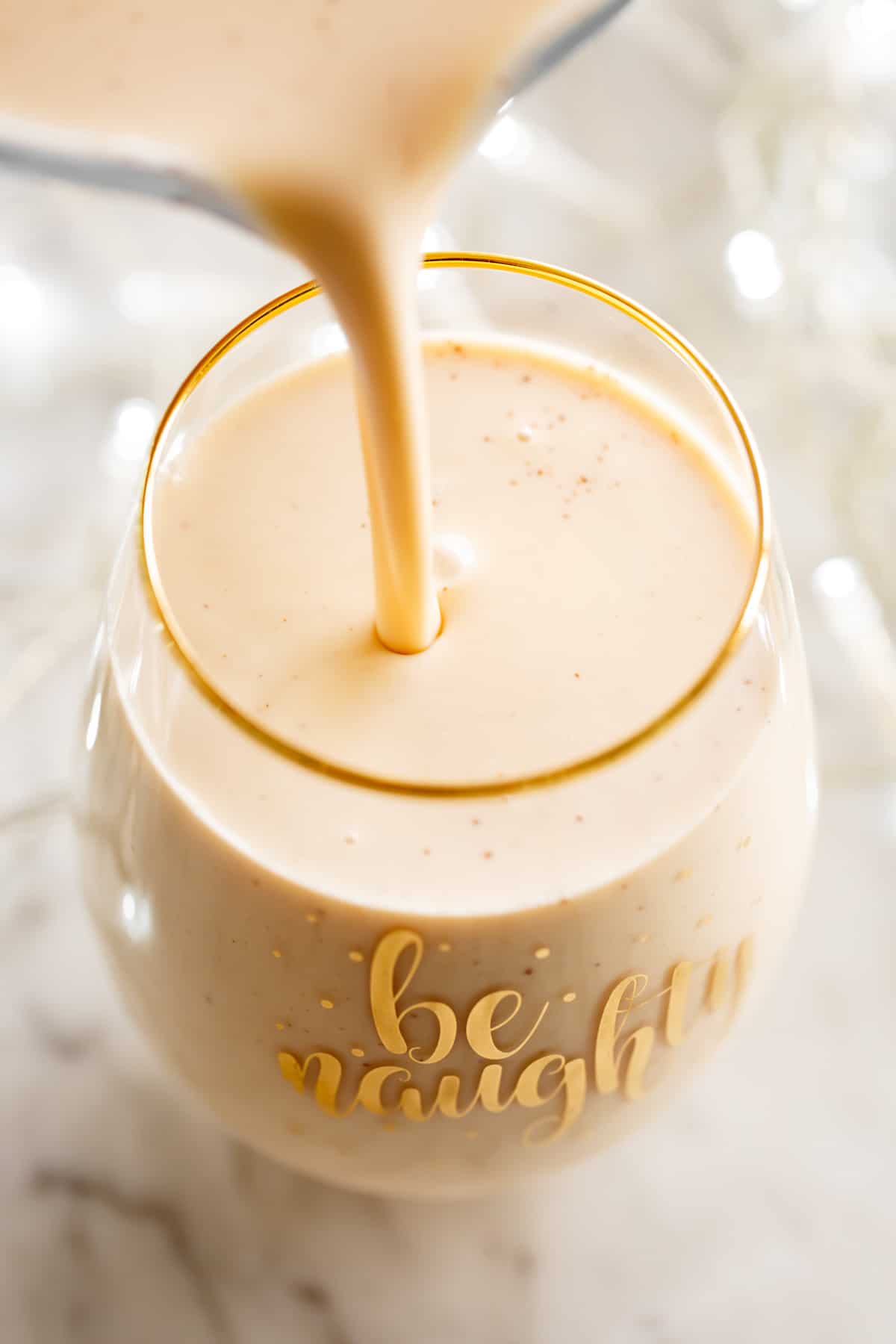 Nothing hits the spot more than a cup of rich and Creamy Eggnog!

While tempting to drink your creamy eggnog straight after you’ve finished, it tastes even better when it’s had a chance to chill in the refrigerator. 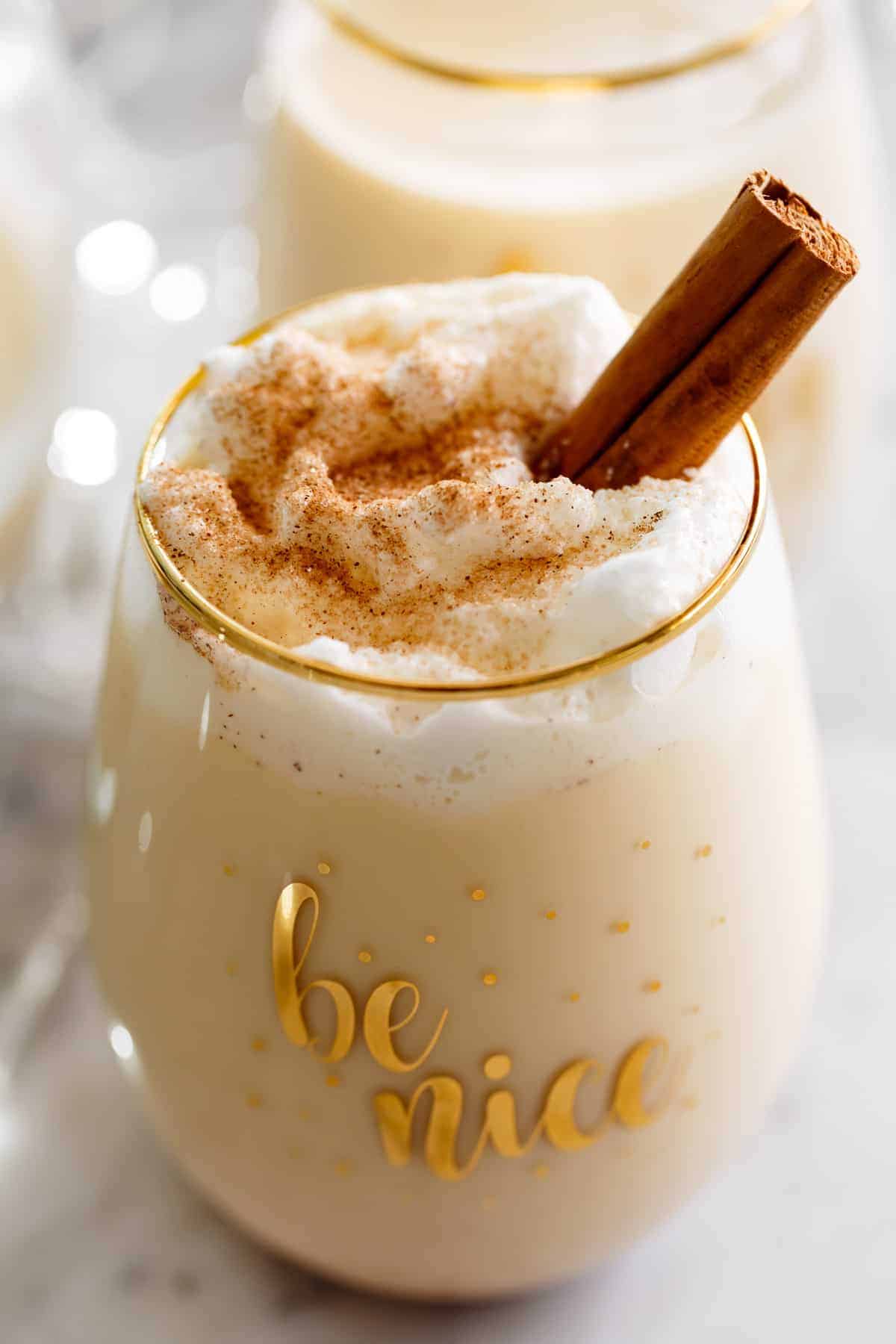 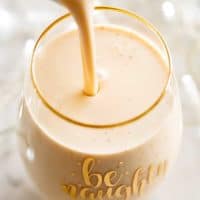 Extremely smooth, rich and creamy Eggnog you will make every Christmas. Like nothing out of a carton, never buy store-bought eggnog again! A sinful seasonal treat well worth the work. The best part? It just gets richer and creamier as it sits in the refrigerator.Use rum, bourbon, cognac or your choice of liquor. Just add more or less to suit YOU!
PRINT SAVE go to your favorites
Prep: 15 mins
Cook: 10 mins
Total: 25 mins
Serves: 8 serves