The baddest (as-in-sunglass-wearing-leather-jacket-motor-cycle-riding) assortment of donuts ever.done. Period. Healthier than our deep fried amigos, baked- not fried – like an annoying infomercial – made with a mix of wholemeal | whole wheat flour and some white flour for the added epicness of donuts. 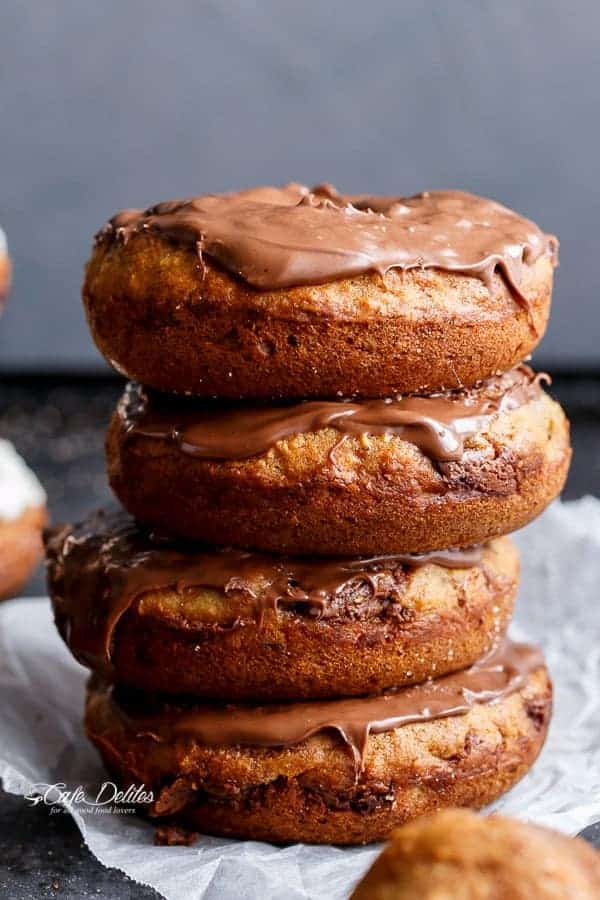 Well, Bananas were growing old and smushed. And just when I was going to make yet another banana cake – banana bread – banana blondie – banana pancakes – type thing (which you can find here), I put the brakes on, spilled some coffee in a mid-air collision with the fruit basket, and eyed my sparkling new donut pans. I was so excited to get them, and they’ve been sitting here collecting dust for the last two months. Sad, huh? 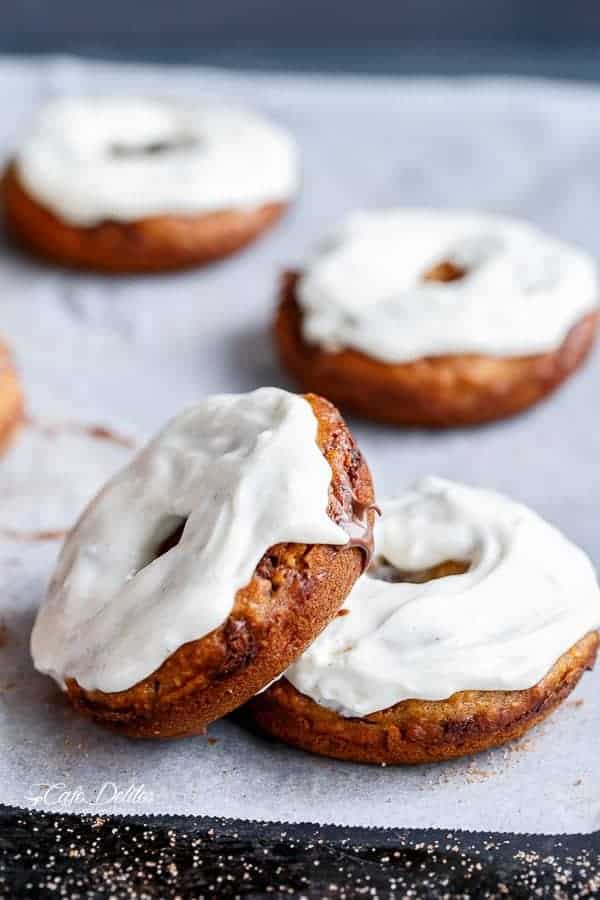 So….long story short…because we all have places to be, things to do, people to see… I turned banana bread into donuts. Nutella stuffed ones. Do you see the Nutella oozing out of that donut up there? Beautiful…isn’t it? 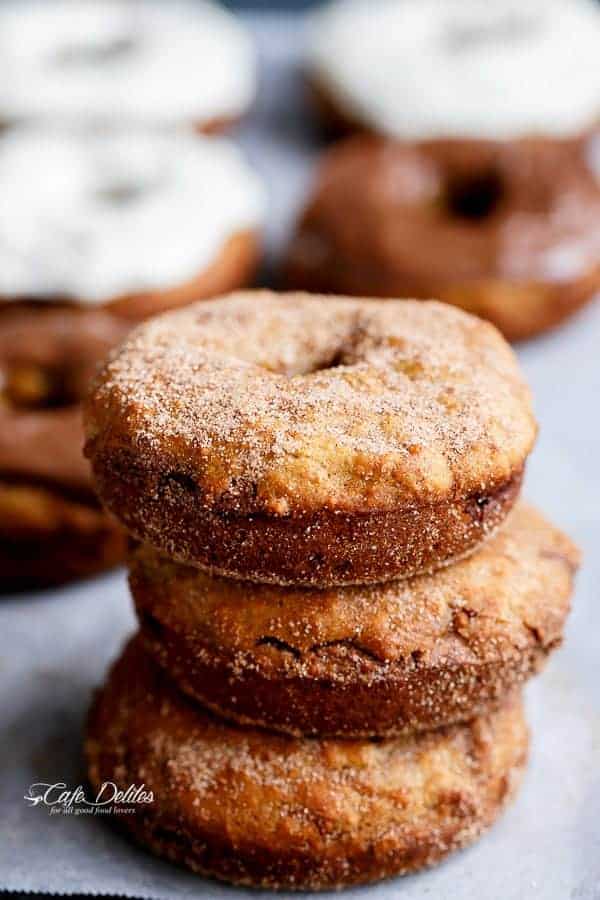 But then, I couldn’t decide on toppings. I know. The dilemma.

Cream Cheese frosting is a given with anything Banana….but would it work with the hint of Nutella? (Yes. The answer is a huge yes). So, I used all three of the ones I kept bouncing back and forth from-in-my-head to test them all. Warm Nutella Topping, Cream Cheese Frosting, and Cinnamon Sugar. Yeap. 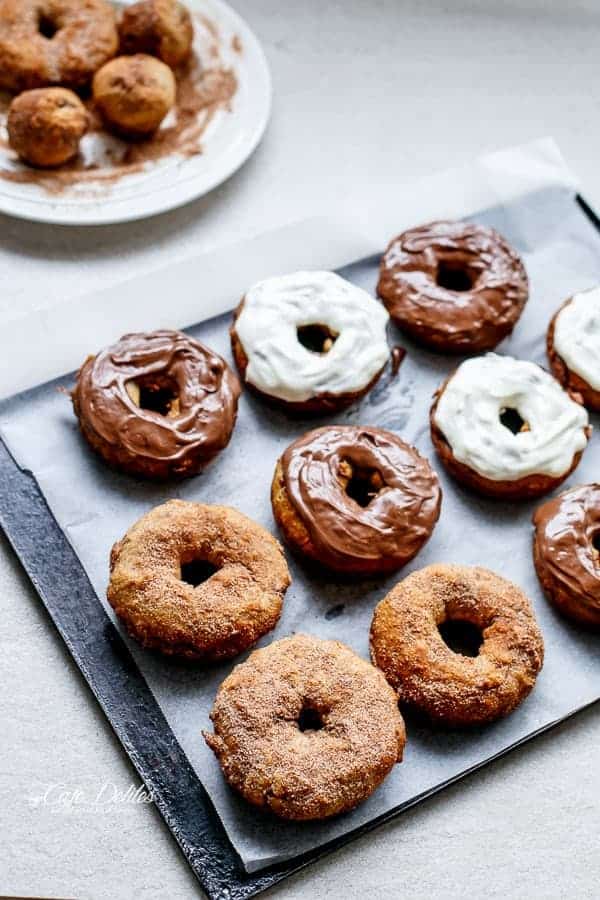 And, I made some Donut Holes on the side. Just to see if they worked. Totally did.

Ohhhh Nutella. A semi-covered donut in the pan, waiting to be covered up and go into the oven, just to show you guys how’d do it. 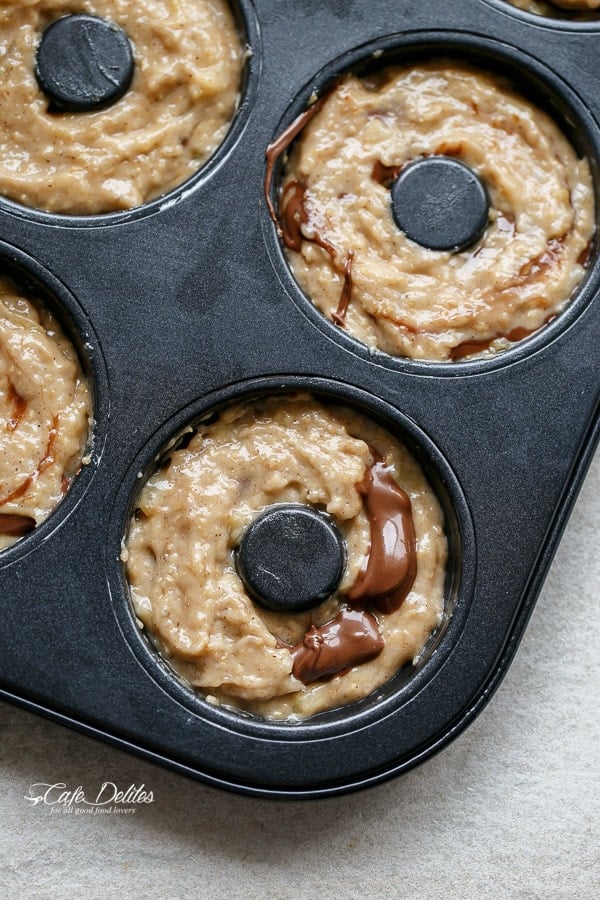 Test one: frosted with Warm Nutella. No extra sugar, butter, cream or anything needed in this here frosting. Because Nutella can speak for itself.

You’re welcome. I figure Valentine’s Day got a whole lot holier for Cupid and St Valentine. 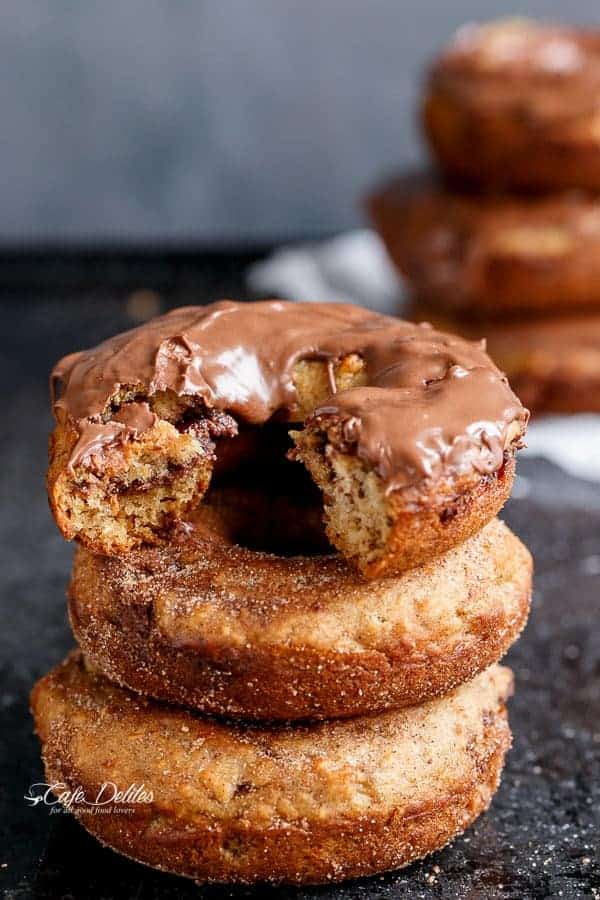 That Nutella is pure perfection. The donut? Like a real donut. Fluffy and soft on the inside, with the Nutella hiding in there is just heaven. 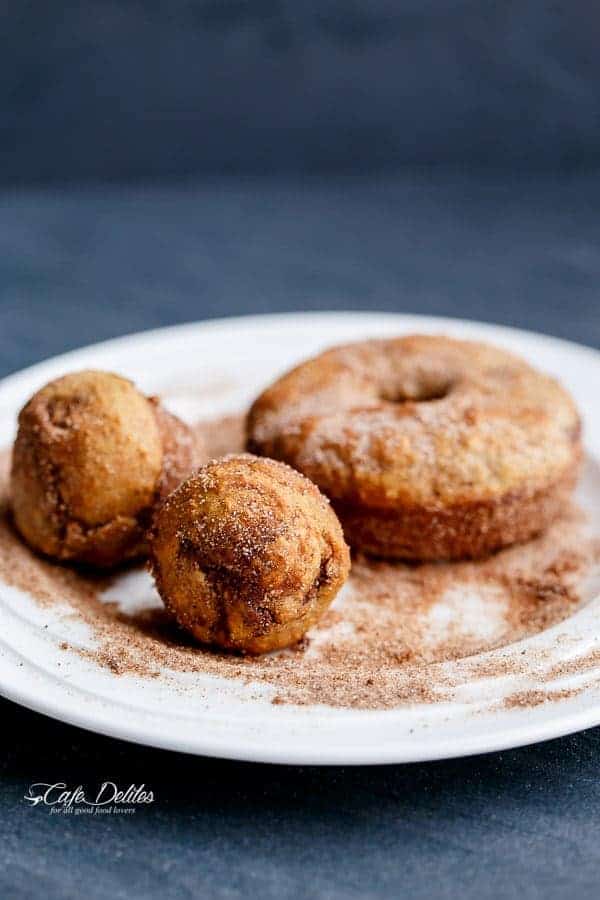 Test two: Cinnamon Sugar Banana Bread Donuts – stuffed with Nutella. Oh lord. How to choose? And believe it or not, they taste like the deep fried butt-fattening cinnamon sugar friend of theirs. (My kids aka the best critics in the world, loved these more than bakery ones.)

Well, then that’s saying something. I don’t know how…but these donuts managed to set like the real deal on the outside, with the incredible banana cake/donut flavours on the inside.

Test three: Cream Cheese Frosting. The one my heart skipped a beat for. The one this entire post is dedicated too.

Cream cheese and banana bread WITH Nutella and cinnamon? 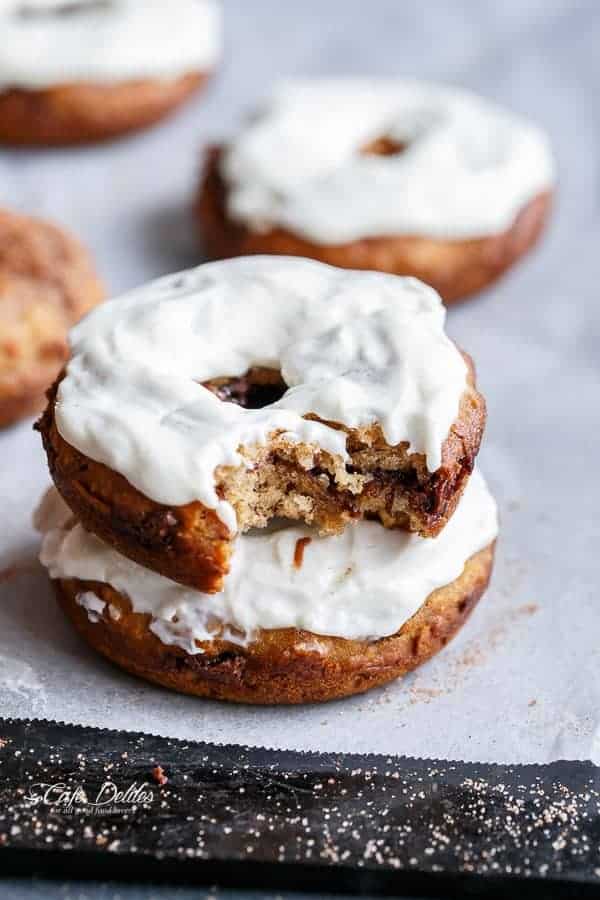 So…for your convenience, I surveyed my family, and we all came to the conclusion that this was the best way to please everyone at the same time. They loved the assortment, which is why I’m posting them all right here – for you. 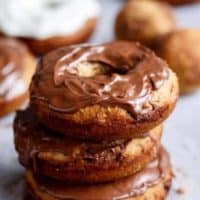 Weight Watchers: 5pp per donut (not incl. toppings as these are optional)
PRINT SAVE go to your favorites
Serves: 15 donuts (or 12 donuts + 3 donut holes)

Copyright 2014-2015. All rights reserved. All images & content are copyright protected. Please do not use my images without prior permission. If you want to republish this recipe, please ask permission FIRST and provide a link back to this post for the original recipe.