Nutella Stuffed Banana Pancakes! Disclaimer: Incoming Cheat Meal coming in! You have been warned! Don’t hate me. This one is for the kids. OKAY. So it’s for adults too…

The most perfect stack of Banana Bread Pancakes FILLED and STUFFED with Nutella for the most epic birthday wake up call! 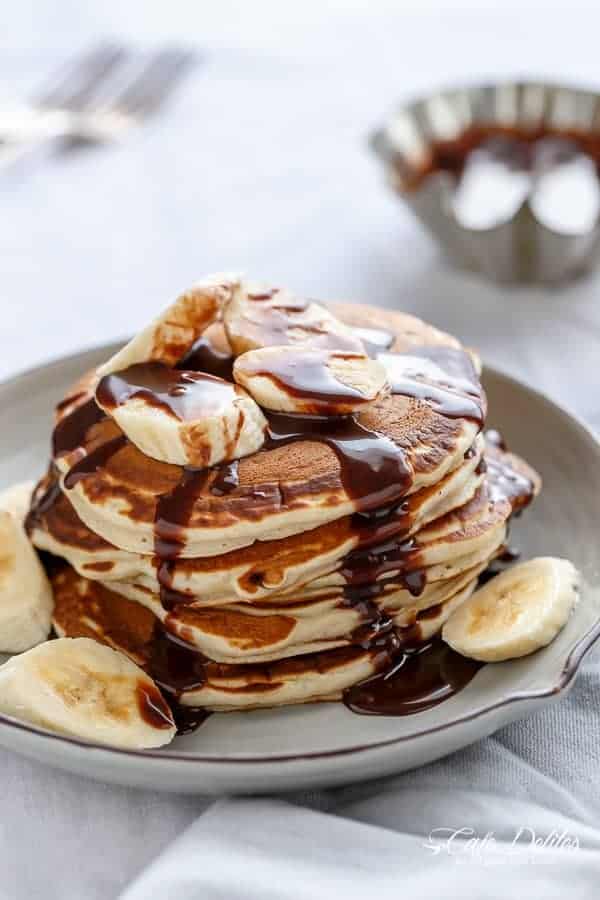 Drizzled with Nutella sauce….I think anyone would want something along these lines to celebrate getting old. Or in my daughters case…growing up (not gonna cry). 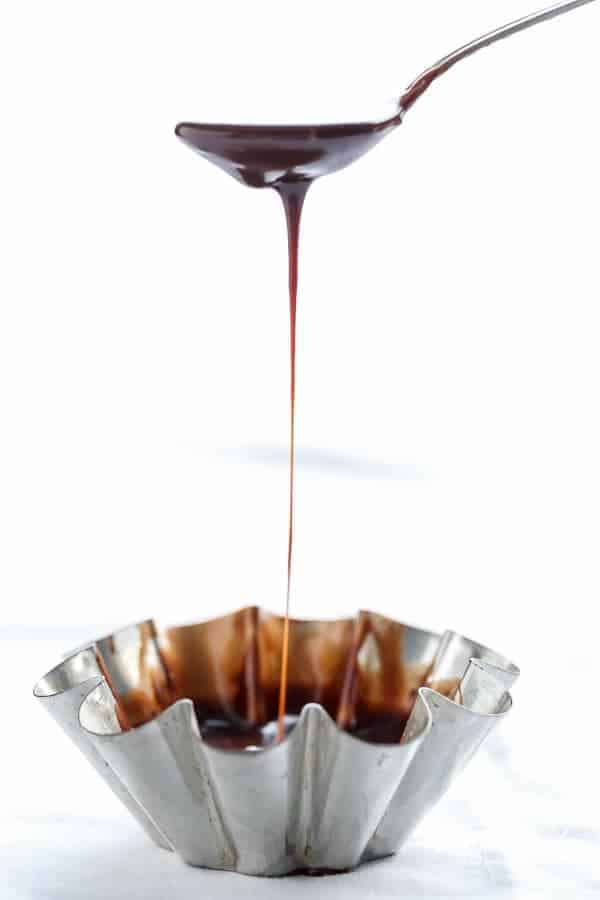 How in this lifetime did these come about? Well, my not-so-little-anymore-girl put an ‘order’ in for these Chocolate Chip Banana Bread Pancakes. But, knowing my daughter all too well, I knew she’d end up smothering them with Nutella. So stuffing them was a better option.

I even tried these with my healthier Nutella Spread recipe. Both are equally amazing. 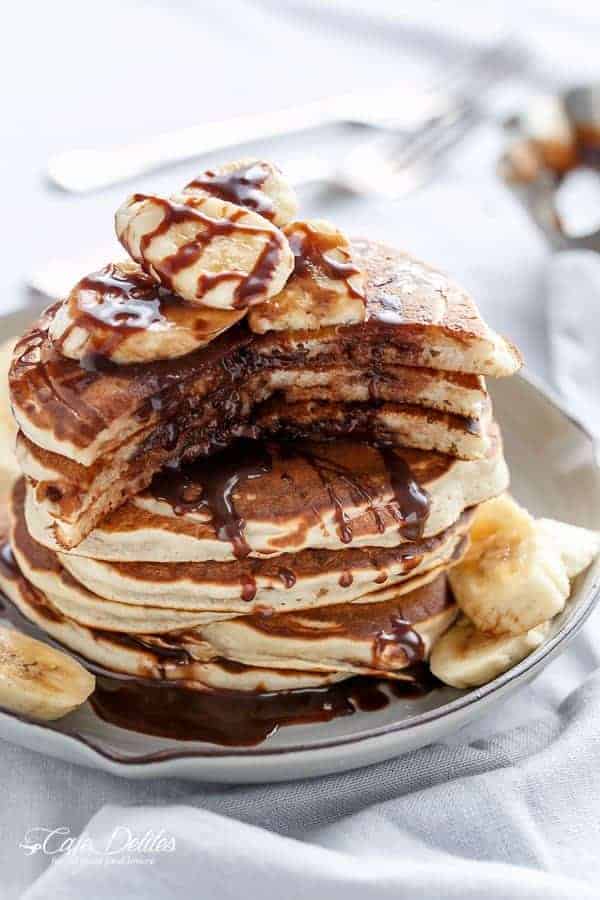 Taking cues from all of the Nutella filled every-things I seem to be obsessed with (especially these Nutella Stuffed Cinnamon Sugar Pancakes), it was only fitting to whip this dangerous stack up as a birthday breakfast they all went nuts over.

Enough with the healthy, they said. They.want.PANCAKES. 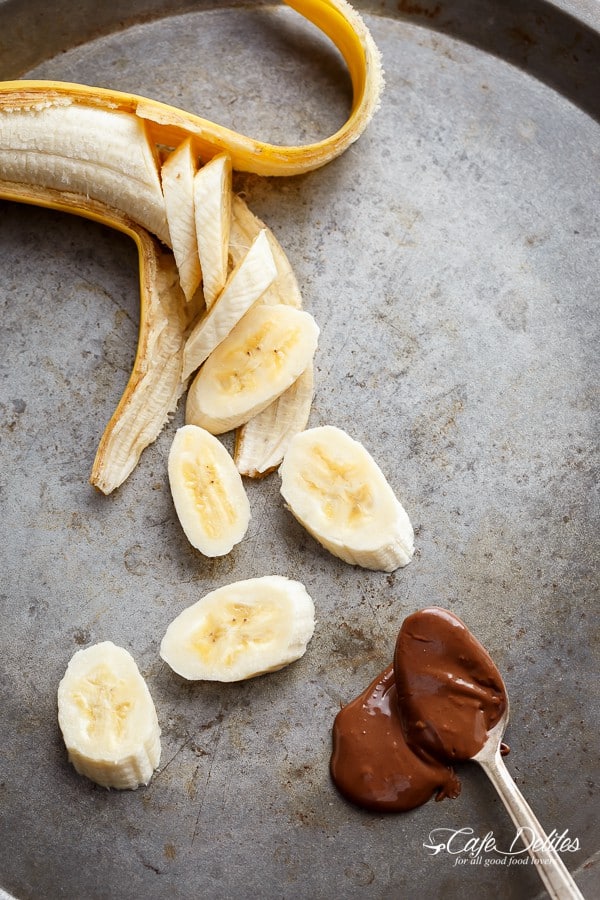 There are NO complicated steps to this recipe. No waiting around while children are screaming around your feet. Just pour, serve and eat. However, since Banana Pancakes are more delicate than the usual plain old pancakes, I have a few tips and tricks to share with you all before you go running into your kitchens. 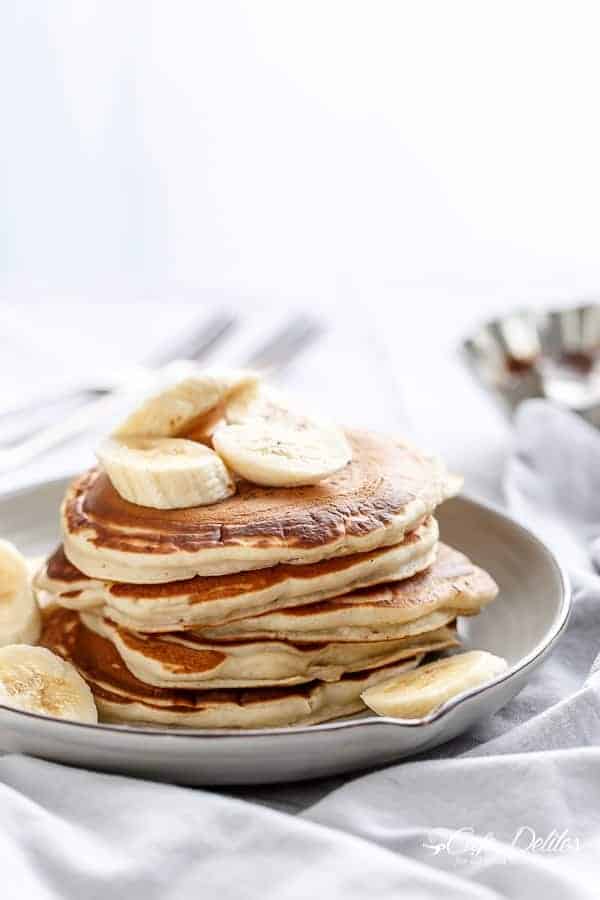 Starting with the amount of batter I recommend you will be pouring on the pan: as much as you’ll want to see normal sized pancakes in the pan straight off, it’s.not.going.to.happen. Start small. I filled a 1/4 cup measuring cup half way for the ‘base,’ then spooned the pre-melted Nutella onto the centre, then covered it with about 1-2 tablespoons of batter in a zig-zag motion to completely seal in the Nutella. It’s easier than it sounds. Or reads, in this case.

Once the top batter goes over the Nutella, your pancakes will spread out to normal sized pancakes. Don’t worry.

How do I know this works? Because, I tried the whole ‘normal sized pancakes on the pan first’ type of thing, and once the Nutella goes on with the covering batter over the top? You end up with a jumbo sized pancake. Yes. I went there. Not necessarily a bad thing, but not the easiest thing in the world to flip. Looking back, I wish I had taken some epic photos of what it looked like.

After that initial fail…I whipped up more batter (much to the birthday girls amusement), two more times to perfect the most perfect stack of pancakes.

What’s the best part about these? The dripping, melted Nutella oozing out of your pancakes. No extra topping needed to be completely honest. 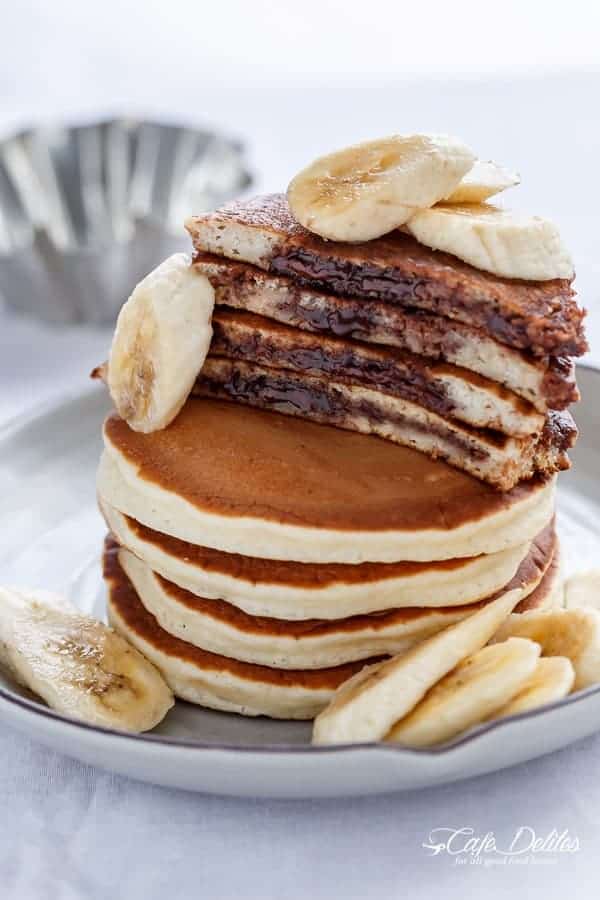 Buuuuhhhtttttt… it’s her birthday. And there’s nothing wrong with extra Nutella on your birthday. 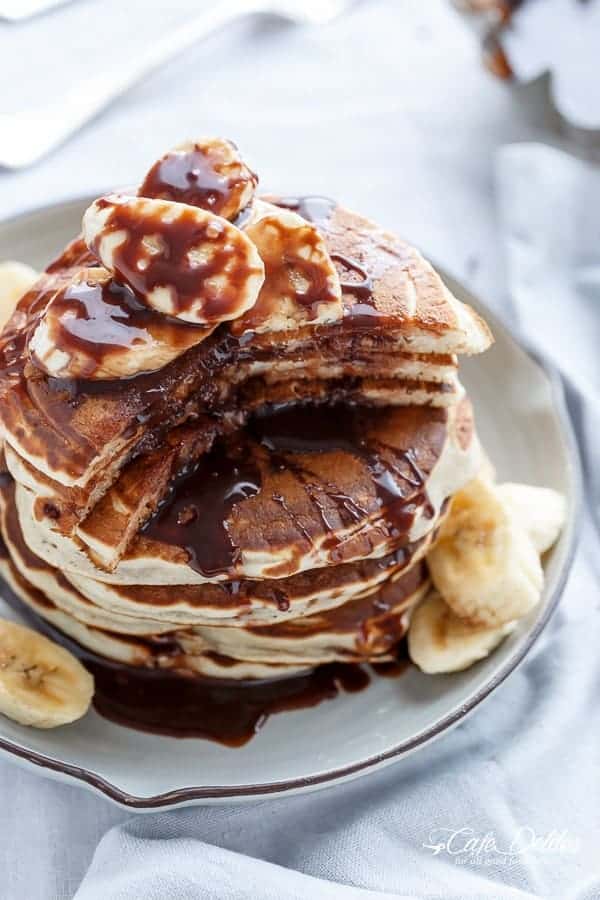 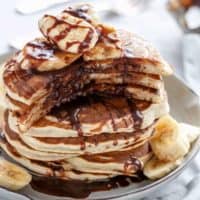 PRINT SAVE go to your favorites
Serves: 12 pancakes

*Melt the Nutella in the microwave for 30 seconds until warm and slightly thinner. Alternatively, place Nutella in a metal bowl over a pot of simmering water (being careful not to have any water touch the Nutella, or it will seize), until heated through.
**Don't worry if it looks smaller than an average pancake! They will become larger when adding the extra batter over the top. Don't be tempted to add any more than the recommended 2 tablespoons for the base, or you will have a mess. Trust me.
« Fudgy Flourless Hazelnut Brownies (Low Carb)
Barbecue Buffalo Chicken Thighs with Avocado »