Maple Glazed Ham adds a magic, juicy touch to your festive holiday table. The perfect baked ham with the most incredible sticky glaze!

Slathered with buttery maple flavours, a hint of pineapple juice and a kick of spices, this is THE Christmas ham recipe of your dreams! Maple Glazed Ham is the most INCREDIBLE centrepiece on the table…filling your home with mouthwatering smells while it bakes!

Take out all the guess work out and find out how to bake a juicy ham with charred crispy edges and a beautiful sticky maple glaze. 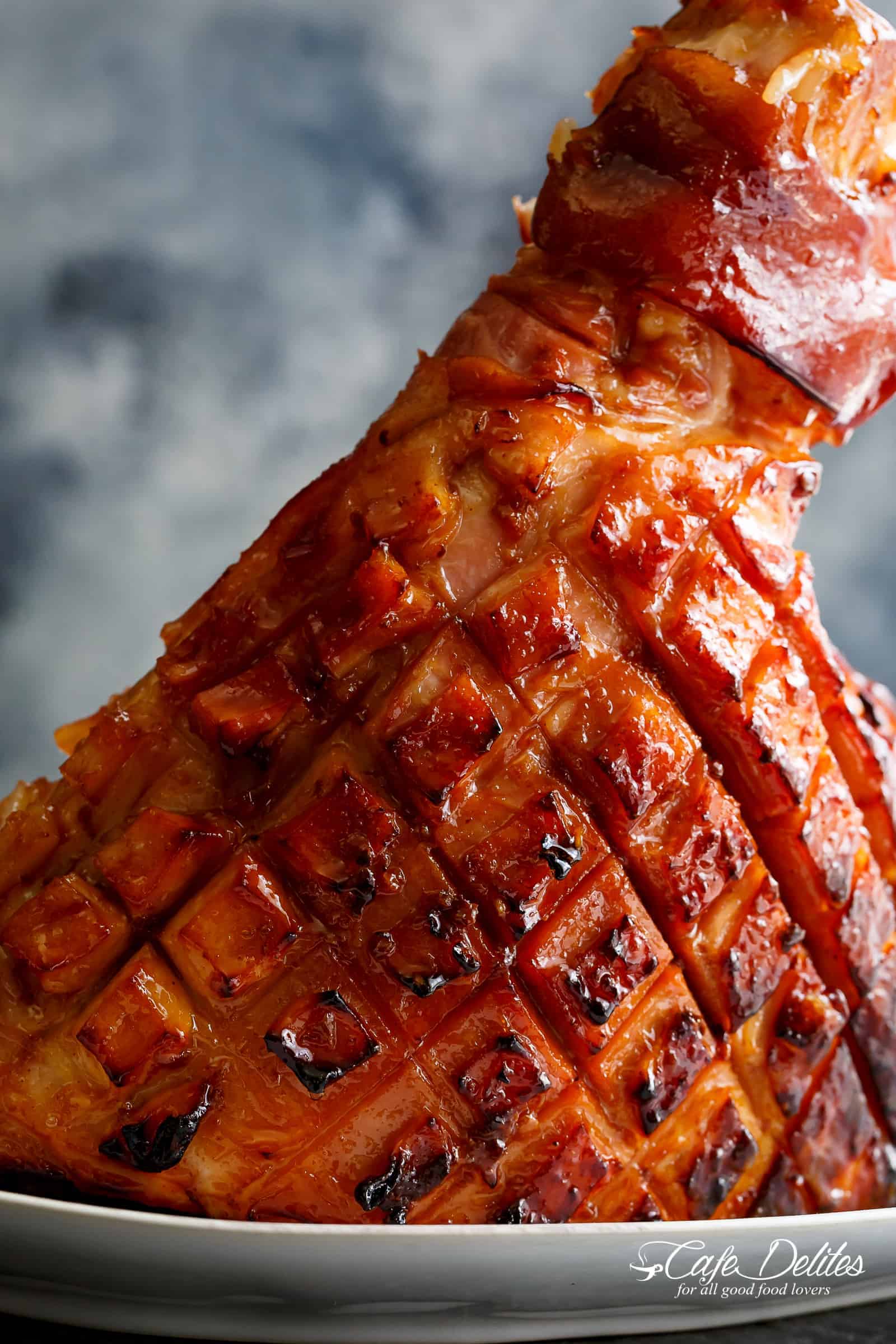 There is no need to be intimidated by the thought of making a maple glazed ham this holiday season!

The best glaze for a baked ham contain either maple syrup, brown sugar or honey. The saltiness from the ham and the sweetness for the glaze complement each other so well, that either of those ingredients make for a pretty special glaze. This maple glazed ham recipe is TOO easy!

You can decorate your ham with whole cloves between each cut, or use ground cloves in your glaze instead as we do here. 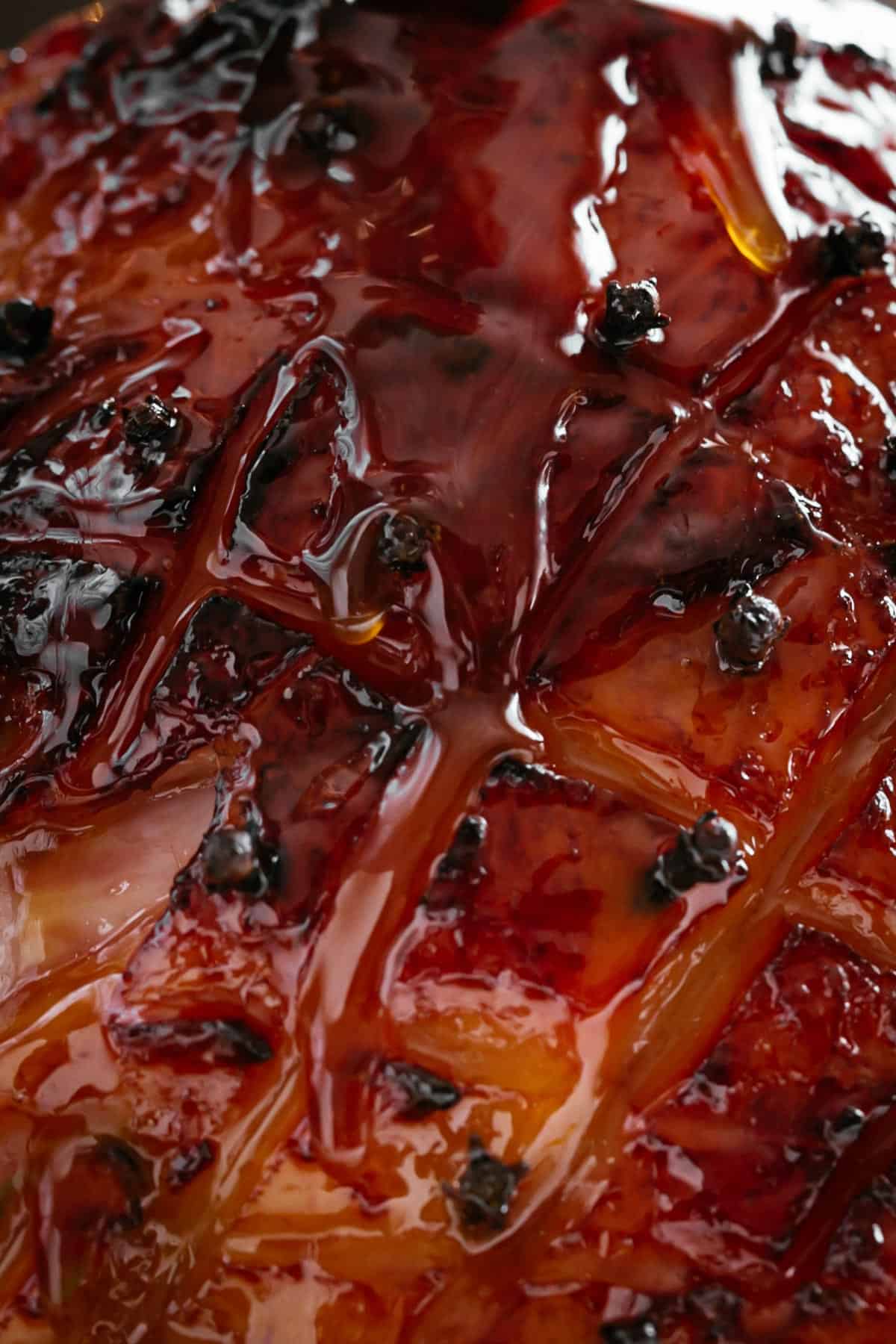 HOW TO COOK A MAPLE GLAZED HAM

A handful of ingredients can turn into something so incredible! The sticky glaze combined with the charred, caramelized thin layer of fat and the natural saltiness of the ham is just magic.

The pan drippings transform into the best sauce to drizzle over the ham! 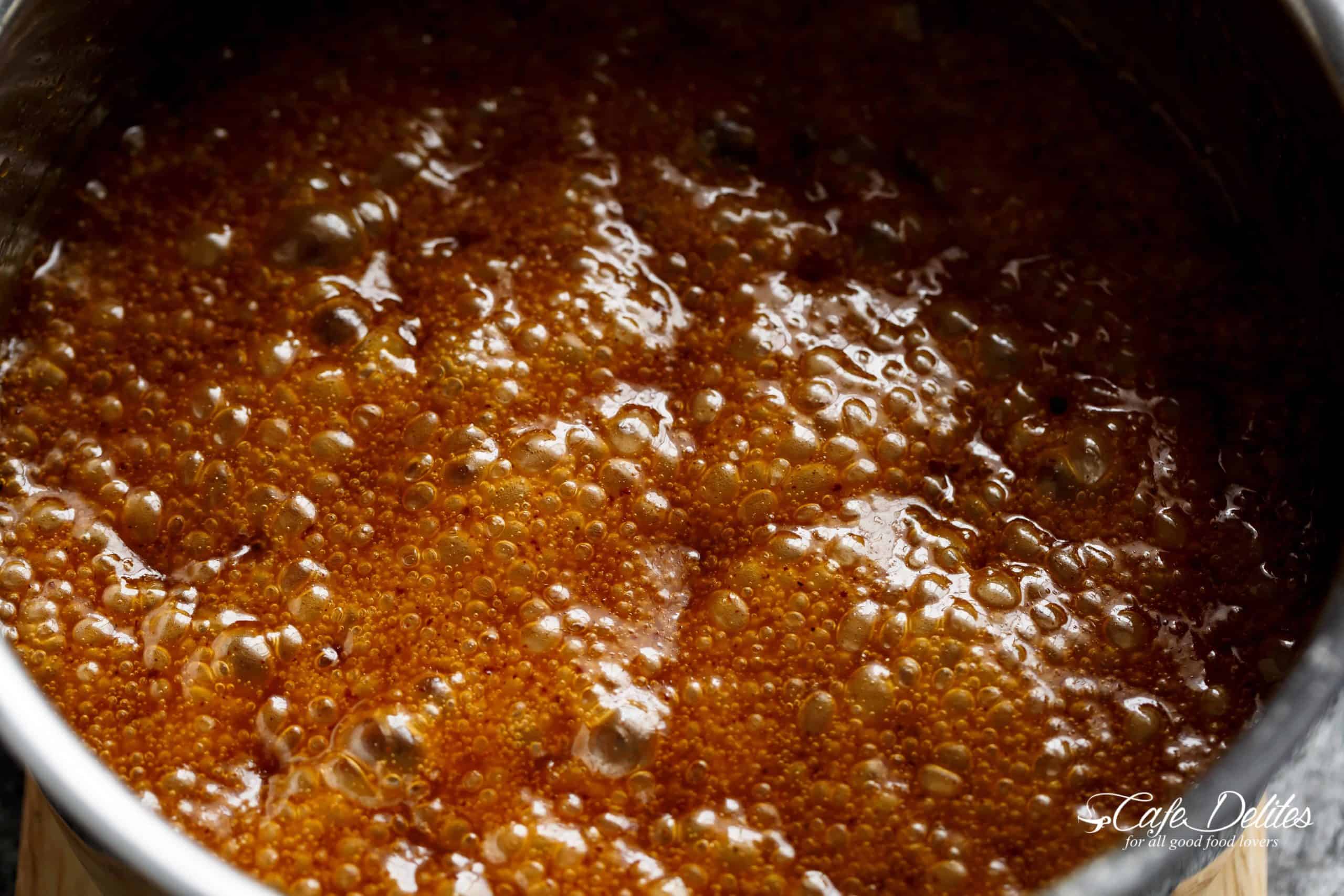 WHAT IS THE BEST HAM TO BUY?

For ultimate flavour and a juicy MAPLE GLAZED HAM, aim for a fully cooked bone-in ham. The best ham we baked during testing is the half leg pictured (shank end of the leg).

The other type of ‘half leg’ which is the butt end (shaped like a dome) contains part of the hip bone and is harder to carve. It has less meat, although it’s very tender and flavourful.

If you want value for your money, go for the type I have pictured here.

When you buy your ham, you’ll notice right underneath the rind there is a gorgeous layer off fat. DON’T trim this away. This fat turns into a beautiful crispy and sticky coating for your glaze and is DIVINE.

Cut a line through the skin all around the shank end. Insert a sharp knife between the rind and fat and run it along to detach both layers. Using your fingers, gently separate the rind from the fat. You can insert your hand deeper into the ham to keep detaching it so it’s easier to peel the rind off. Peel off and discard the rind. Run knife cutting into the fat layer about 1/4-inch deep to lightly score diamond pattern all over the surface.

Glaze and baste and baste and glaze and GO CRAZY with it! When the sticky sauce in the baking pan mixes through those pan drippings and begins to cool down, it starts to thicken slightly and transform into a beautiful deep brown colour. Use THAT to baste your baked ham before serving!

As you drizzle it over your ham, it creates the best shiny, golden glaze for your centrepiece!

Maple Glazed Ham smells just as good as it looks. 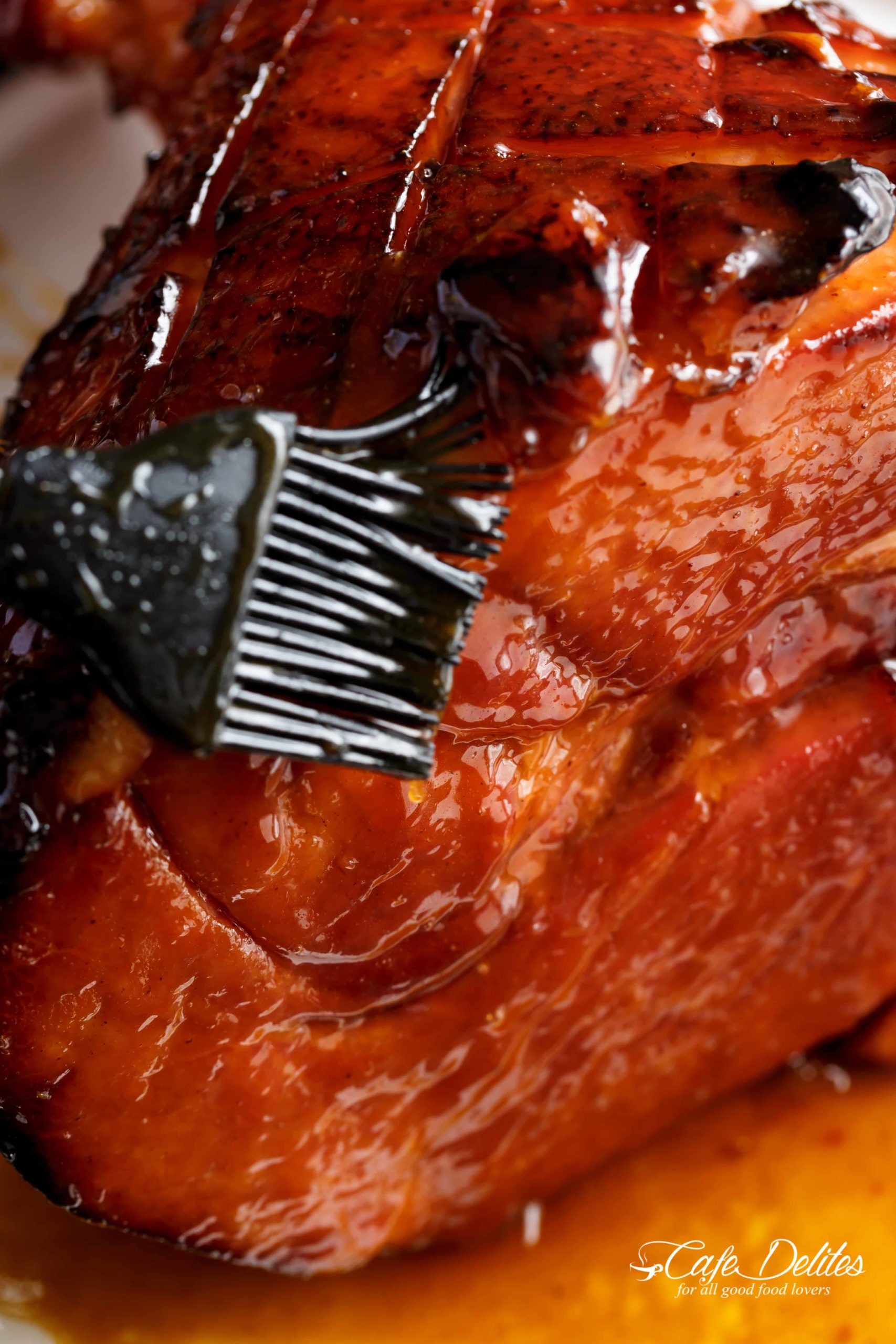 The BEST part is slicing through it like butter, and seeing the juices burst out and run down behind each slice. NO DRY HAM OVER HERE! 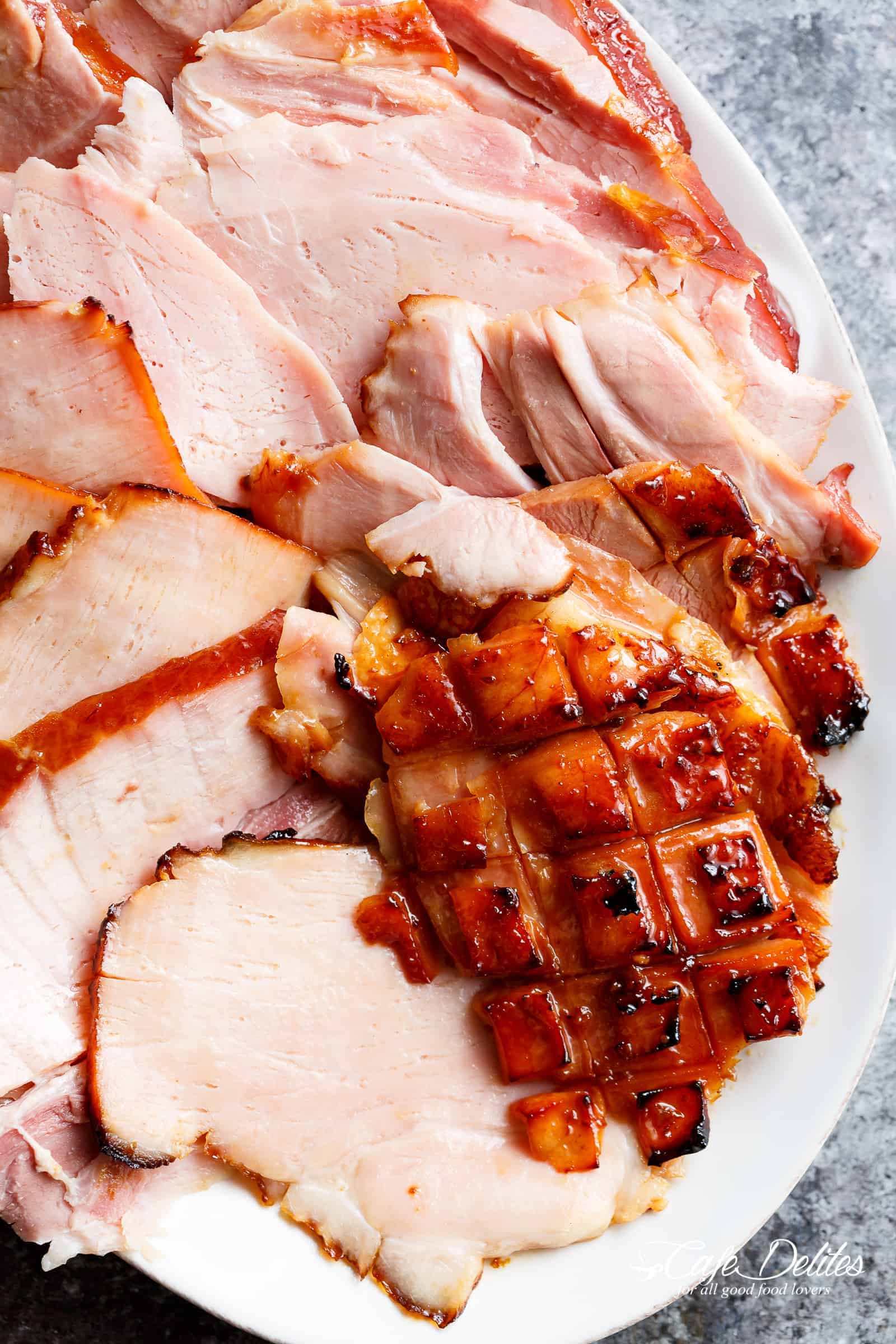 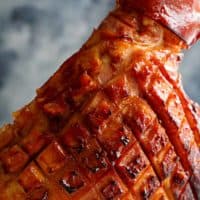 Don't forget to take the ham out of your refrigerator 1 hour before cooking.
If your glaze has been over simmered and begins to thicken between each baste, add some of the pan juices to it and heat it up over low heat until it warms through and is the consistency of warmed honey.