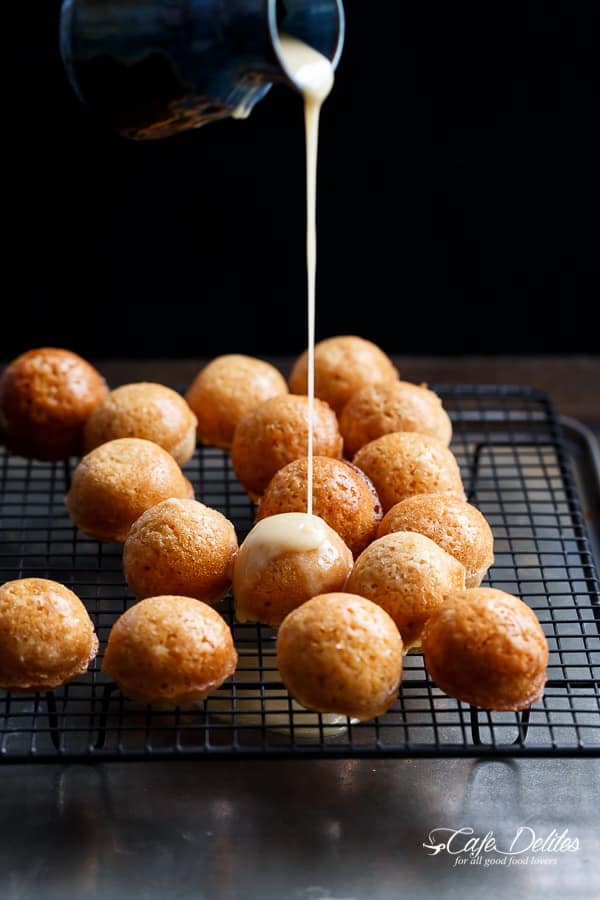 It took three…okay, more like five failed attempts to perfect these into an exact replica of a classically fried donut fritter, with half the fat and all of the flavour. These are fluffy but dense at the same time, like how a donut should be, without the use of any yeast or waiting around for any dough to rise…or deep frying nonsense. 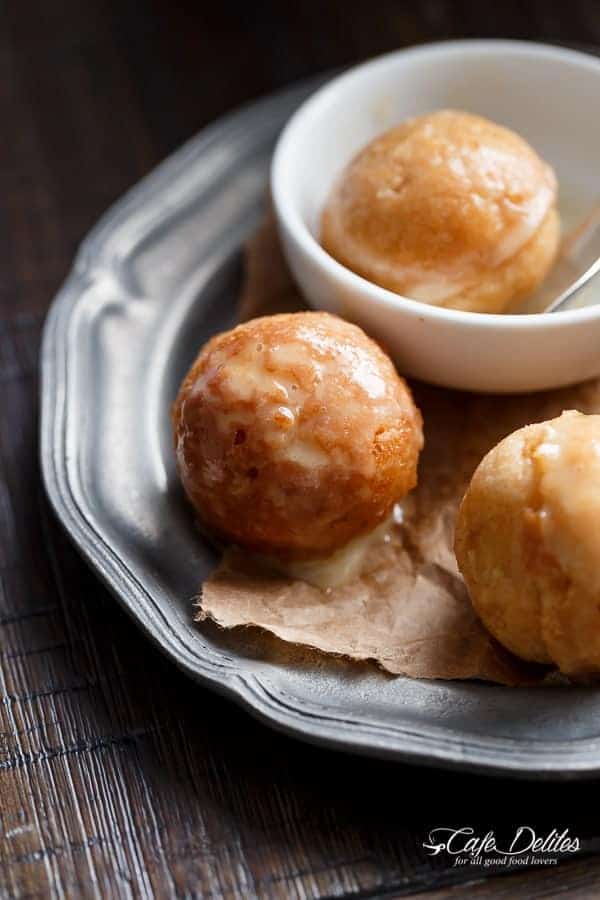 It’s not just the donut that had everyone moaning and reaching for 4 donut holes at a time. It was biting through the sweet and perfect maple glaze outer shell, reaching the soft chunks of apple pieces on the inside, with the perfect hit of cinnamon. And then, to make this even more filled with the promise of apple flavour, I used an apple cider my mum had made this past weekend. Of course, you can sub the cider out and use undiluted apple juice (the cloudy type with floating bits through it). They both work and add the perfect amount of moisture in them while enhancing a pure apple flavour. 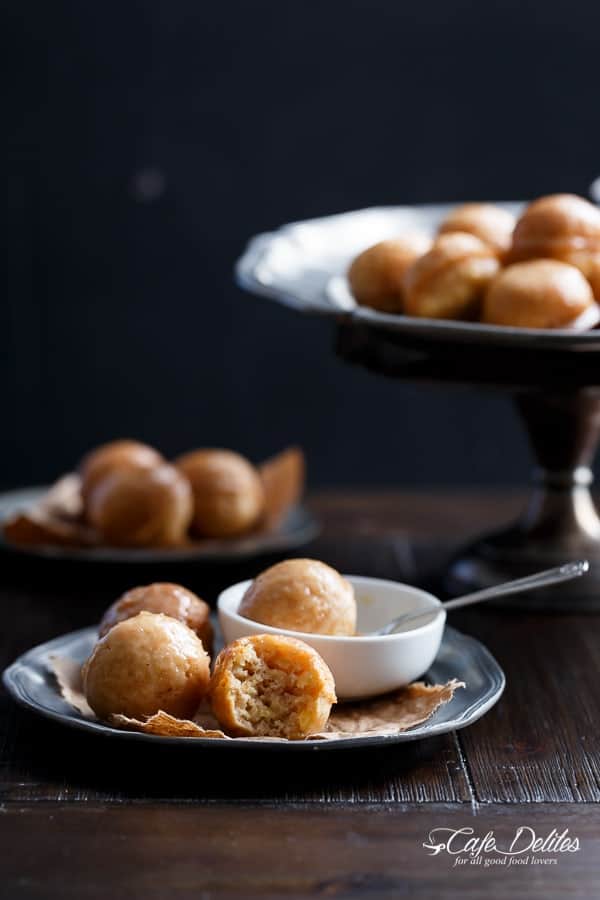 To be completely honest, I was going to get all low carb on you guys again with these…but I promised you I’d post ‘normal’ recipes. And a few of my Weight Watchers readers have been asking for point-friendly dessert ideas in time for thanksgiving. So of course, I jumped on that bandwagon.

The best part is, these can be made in a mini muffin pan or this Cake Pop pan I found on Amazon.

Once the recipe was nailed down and safe for human consumption, I tried this with both different tins and got the same result. The best damn donut holes I’ve ever eaten. In my life. Well, aside from the Nutella Churro Donut Holes. But that’s another story. 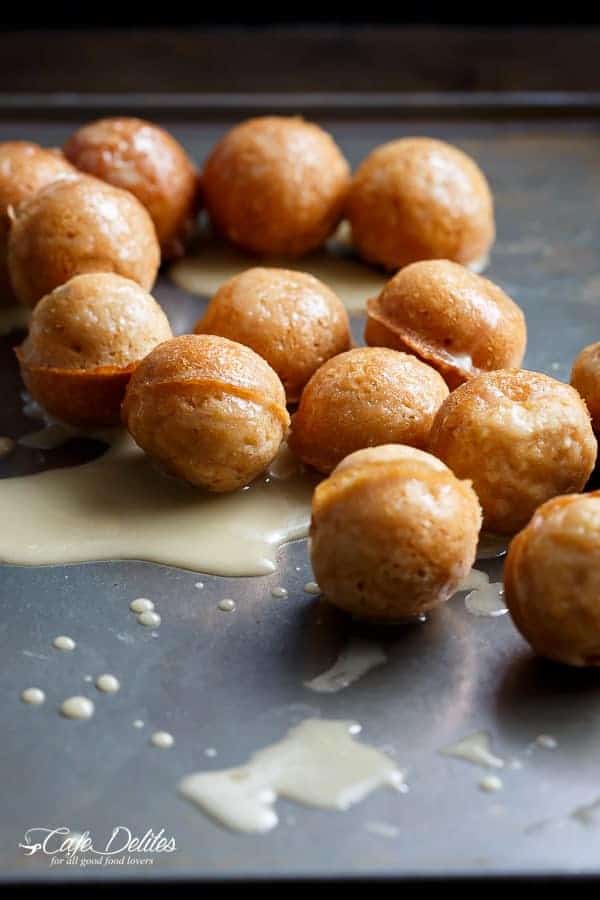 With pumpkin dessert every things flying around all over the place, I have to ask: what about the apples? Well, not like that, of course. It was more like, ‘What about the Apples!’ Safe to say, these with be gone before you get a chance to take one for yourself. I do recommend freezing them as soon as the glaze has set, especially if you’re a sweet tooth like me. I cannot take responsibility for the donut massacre that will no doubt take place at your house. 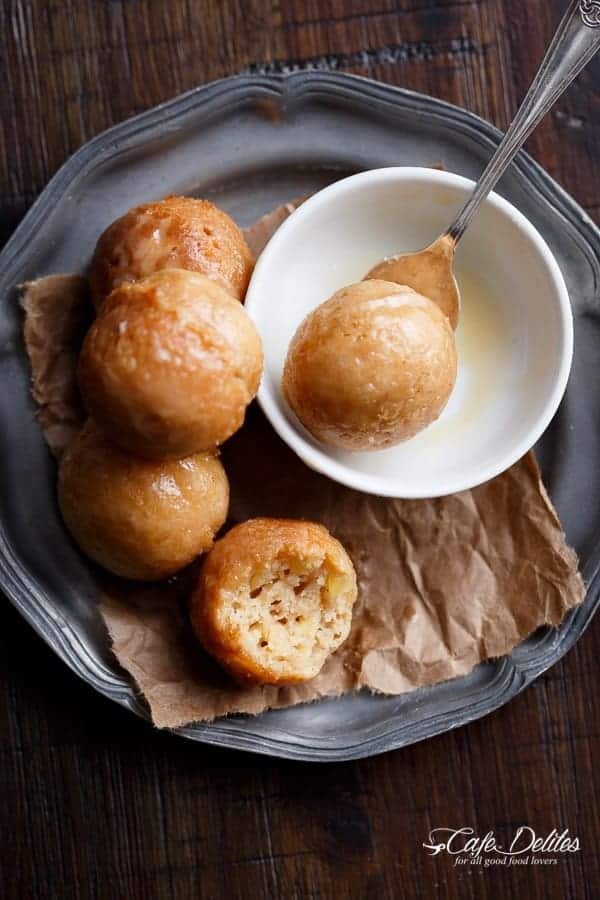 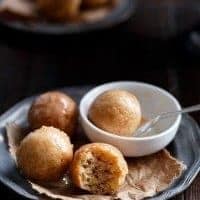 Easy to make baked Apple Fritter Donut Holes with a sweet maple glaze outer shell, soft chunks of apple pieces on the inside, and a perfect hit of cinnamon!
Weight Watchers: 2pp per donut hole (using sugar instead of sweeteners. If using sweeteners, remember to reduce your points measurements to 1pp per donut hole!
PRINT SAVE go to your favorites
Serves: 24 donut holes

*I used a sweetener brand of icing/powdered sugar to cut calories, but you can use normal sugar
**Nutrition information is calculated using sugar instead of sweeteners. If using sweeteners, remember to reduce your points/calories and macro measurements!