Also known as the best French Toasts you’ll ever try. Buttery, coated in Cinnamon Sugar and FULL of CHURRO flavour. I heart Churros. And Nutella. And this right here is the best of BOTH worlds. 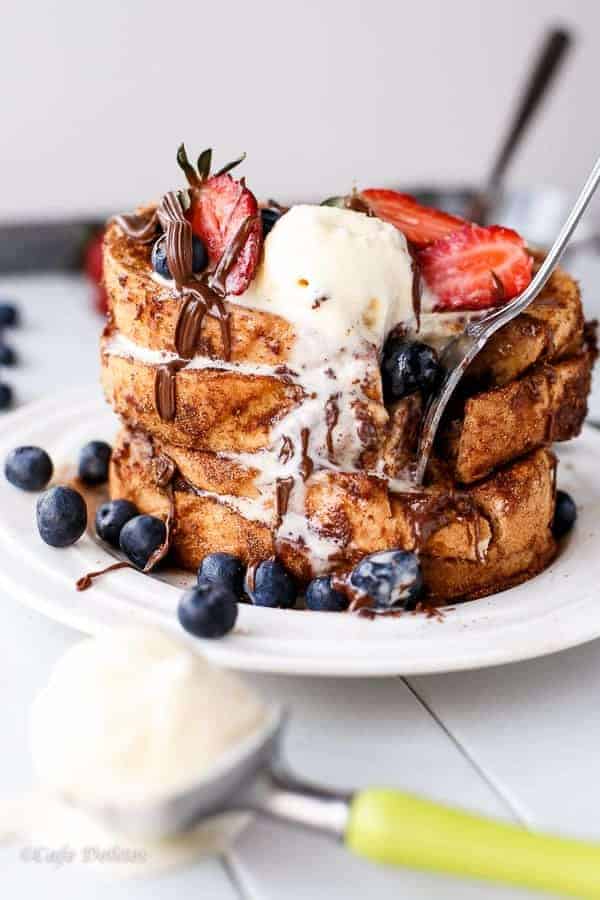 Hi. My name is Karina, and I’m a self-confessed, chocolate obsessed, Churro and Nutella addict. And being that you’re here, reading this, or just shooting down to get the recipe asap…I’m guessing you are too. It’s so nice to meet you.

As usual, the story goes like this: Woke up. Craved Churros. Didn’t have any. Had a dilemma. How to fix it? Make some. But the shortcut version of it. How? French toasts. Welcome to the inner parts of my brain. That’s exactly how I have conversations — with myself. 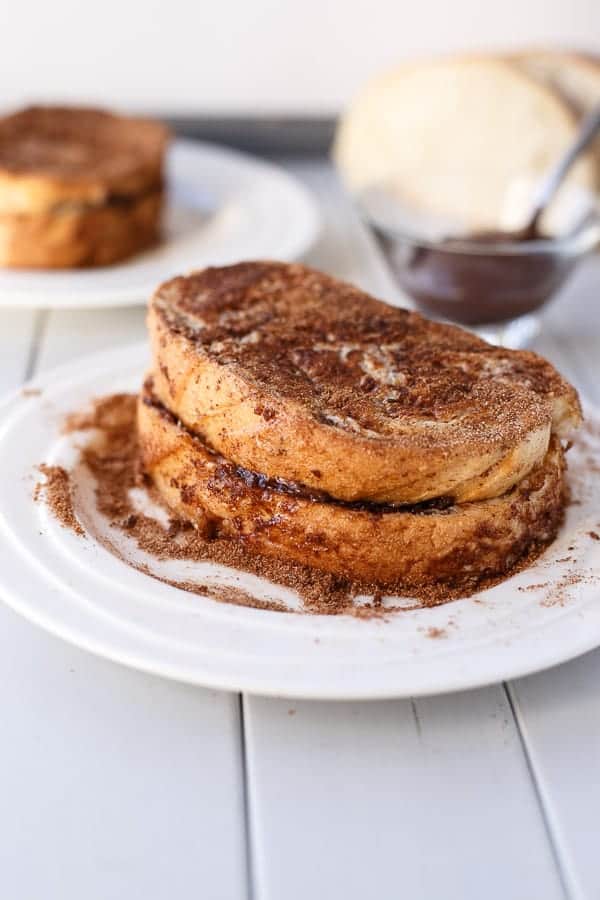 I kinda just agreed with…ummm…myself, and letting out an exasperated sigh, dragged myself into the kitchen and made these for breakfast.

Ok, so maybe not so dragging my feet… More like jumped-outta-bed-and-skipped-while-running-at-the-same-time-stepping-on-some-leggos-but-doesn’t-matter-just-keep-running-because-Nutella-is-coming-at-me kind of thing. You know, an average morning. 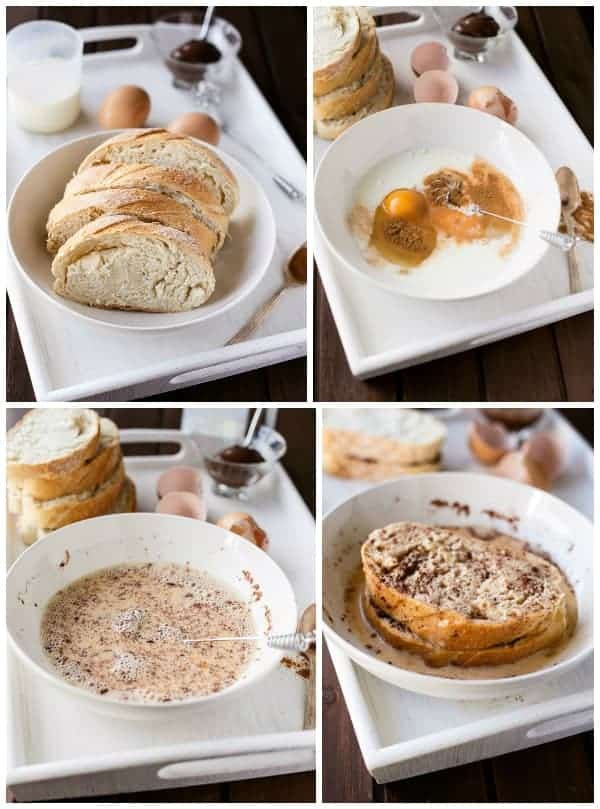 The secret is in the egg wash. Must.put.cinnamon.and.vanilla.into.the.eggwash.

Then of course, smearing the Nutella on the bread like your life depends on it. Because, if you’re anything like me and love a good solid treat on the weekends after a hectic week, you need this. And soaking it in that magical Churro egg wash, smelling the cinnamon and vanilla cascading into your senses, with the chocolate and hazelnut like a dream come true. 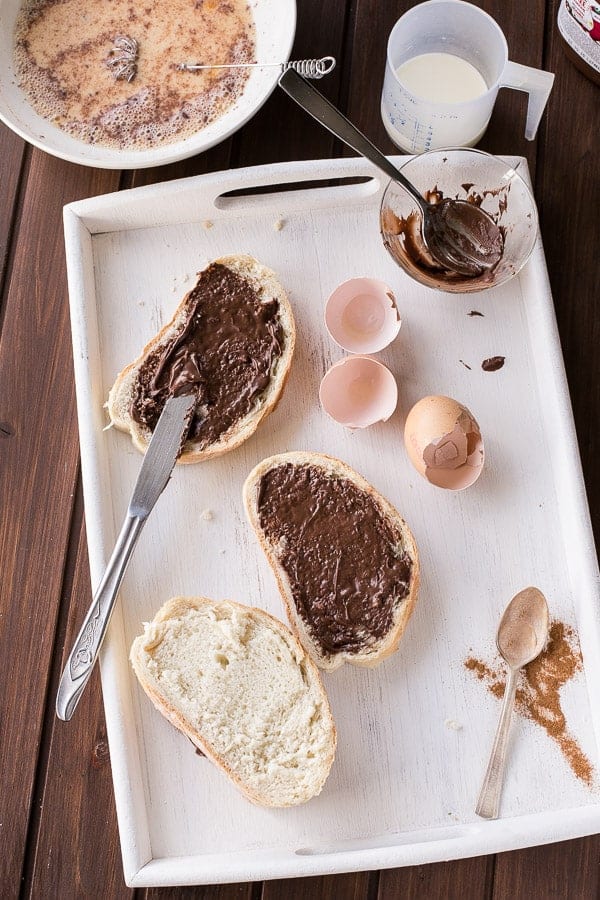 Another secret…Must.fry.in.butter. Of course, I use light butter, or reduced fat, because I figure the Nutella is going to do enough damage, but I still want the Churro-ness flavour. Have I lost you? I promise, we’re getting to the good bits.

Then comes that cinnamon sugar. The fairy dust of all donut french toasts, and now Churro french toast. With the Nutella all warm and as melted as Nutella can get, peeking out from the centre, so of course you become 5 years old again and scoop some out with your fingers to ‘try it.’ Don’t lie, I know you do. Don’t worry, this is a sacred space. We are all here for the same reason. Nutella. Cut it open to see the ooze of warm Nutella… That would be the best part. 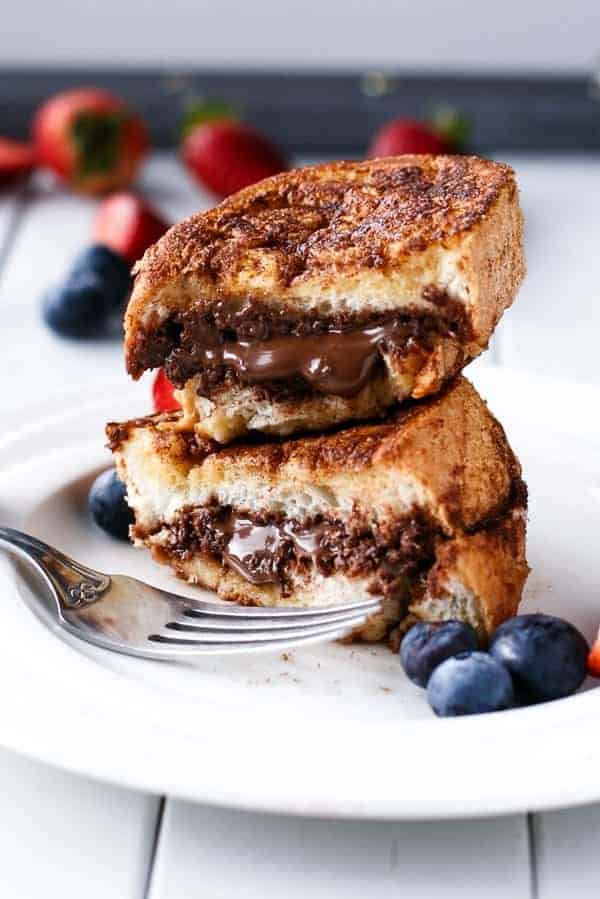 And finally, topping these French Toasts with a scoop of frozen yoghurt, ice cream, berries…. 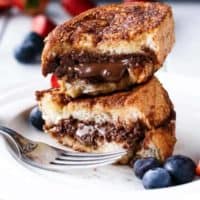 Weight Watchers: 8pp per serve!
PRINT SAVE go to your favorites
Serves: 2