The perfect fall dessert. Moist and fudge-y pumpkin blondies swirled with sweet and creamy cinnamon cheesecake and filled with melt-in-your-mouth chocolate chips to make the best blondie you’ve ever had in your life. 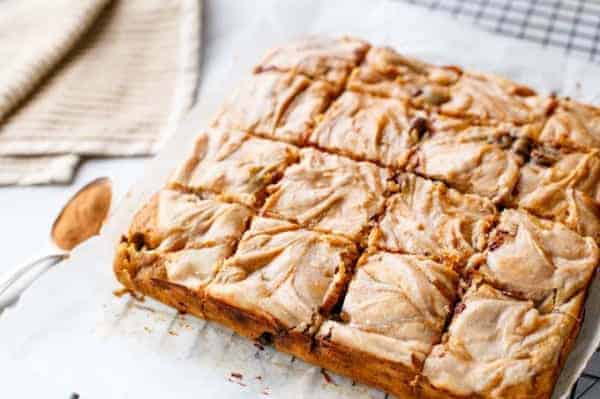 Being that I’m in Australia….we don’t normally pimp our pumpkins into desserts. I mean, maybe some of us do, but mostly our pumpkins are roasted with meat. But, seeing so many ‘fall’ recipes, also known to us as ‘autumn,’ I’ve seen so many dessert recipes based around pumpkin that I just had-ta jump on board. yes. Had-ta.

Well. Can I just say HELLO PUMPKIN! I will now and forever onwards from this day forward make it a compulsory rule in this house to always pimp my pumpkin. And what better to try our first ever blondie than with a creamy Cinnamon Cheesecake swirl? Oh! And before I forget. Chocolate chips just happened to fall into the batter. I didn’t do it. I swear. 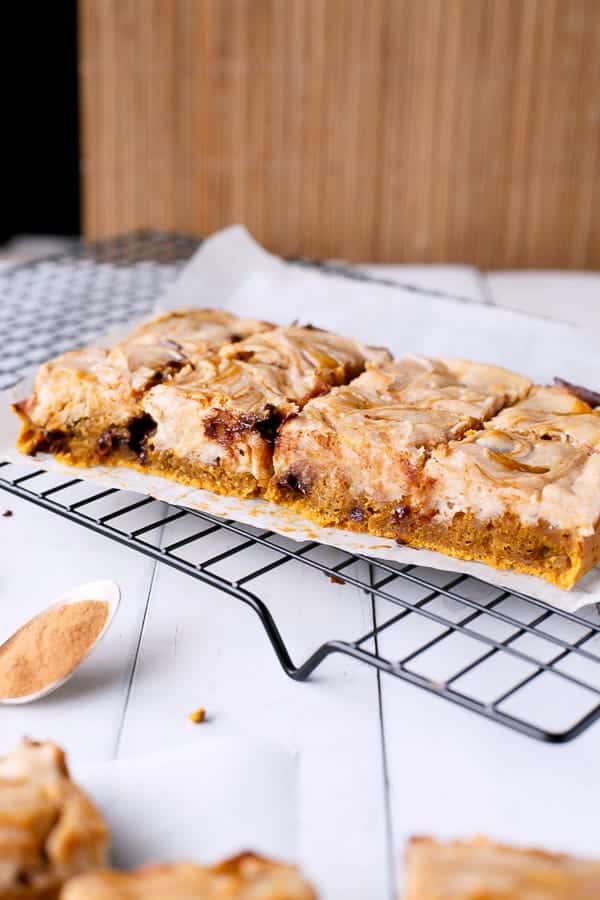 Maybe. Wow. These blondies kicked my ass. No, seriously. My first attempt? Not sa’ good. But my second? Hold the phone! My oven was smelling super fudgilicious. The pumpkin in these, sweetened and flavoured with some honey…I mean…you guys NEED TO MAKE THESE!

And then melty chocolate chips on top of everything else going on in there was like the cherry on top of popping my pumpkin-for-dessert cherry. 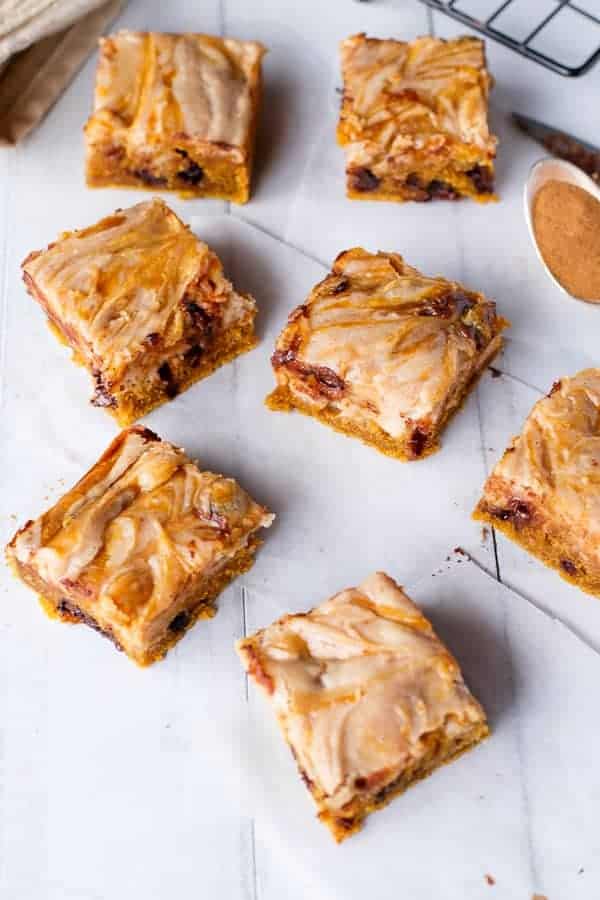 I could not stop spooning with the batter…I mean spooning the batter outta the bowl. I nearly had to make another batch, because the kids dove into this with all of their hearts and souls. Bless ’em. Before I chased them away. 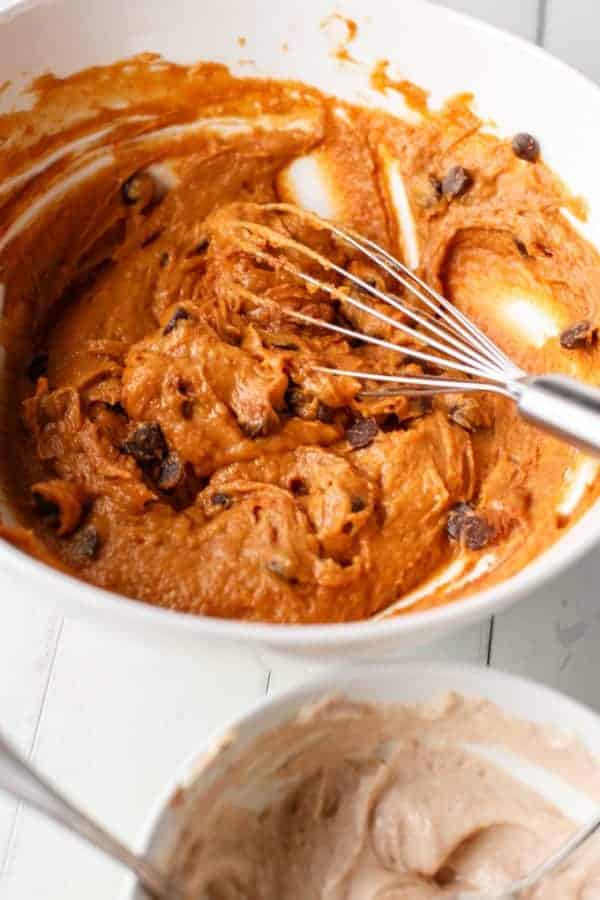 And then the cheesecake mix? Well, let’s just say the spooning got a little worse.

And then the swirrrrrl…..with the chocolate chips peeking up out at me, all innocent like? Girrrrrlfriiiiend… this batter was lucky to make it into the oven. 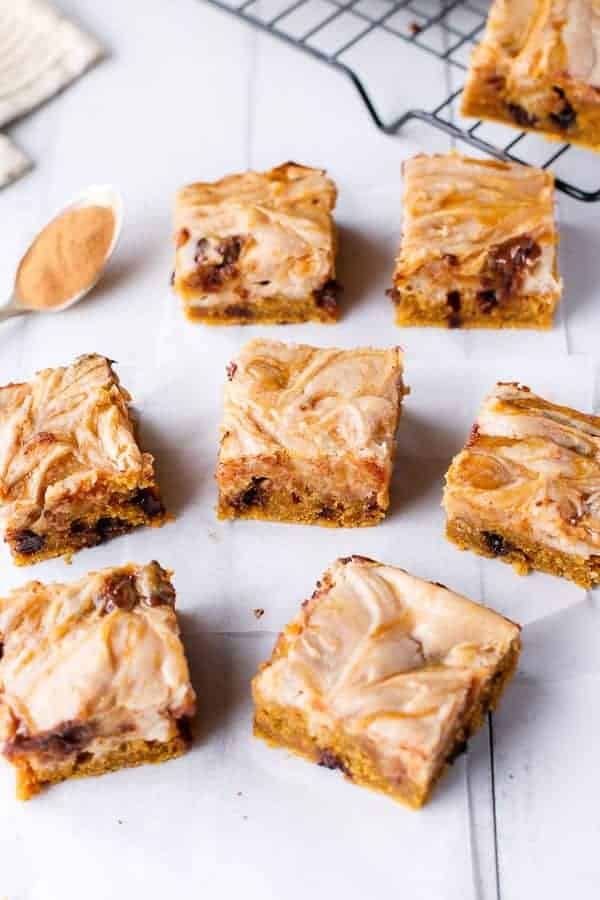 Lining the tray with baking/parchment paper was the best decision I made. I actually thought ahead of time, and knew that I’d want to pull these babies out ASAP. Such an easy and smooth transaction… Lemmetellya. Shooting these was a slow and painful process. Slow because cutting into these, they were so super fudge they almost…almost…didn’t feel set.

So moist. Super fudge-licious I nearly died. But breaking them apart, ever so gently, they were absolute perfection. 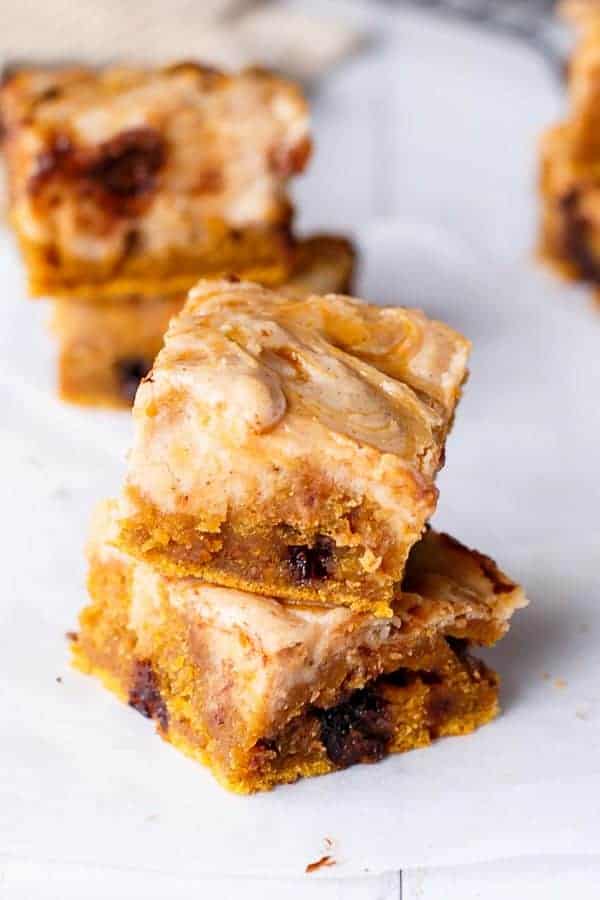 Ugh. So fudgy I want more! Sadly, they didn’t last long. Maybe a good 20 minutes all up. 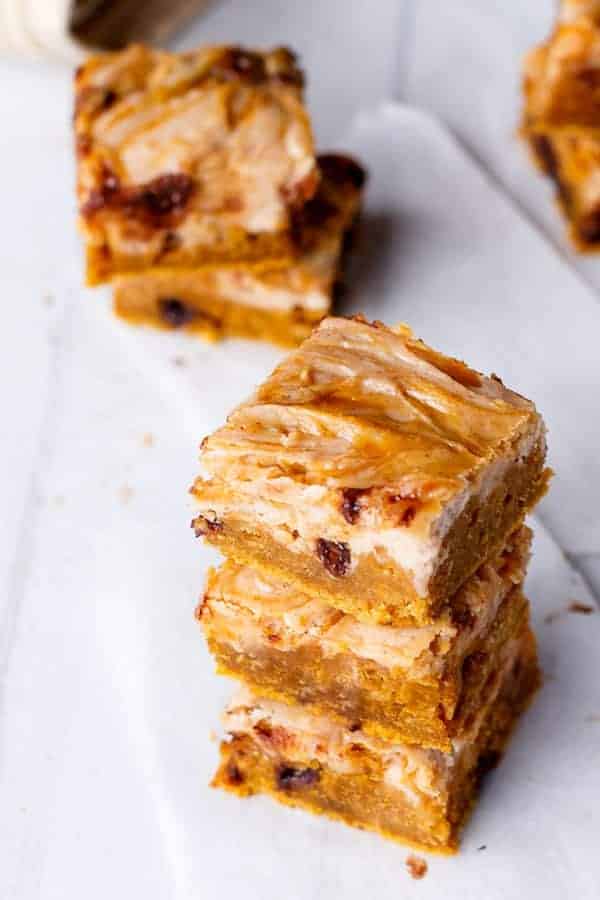 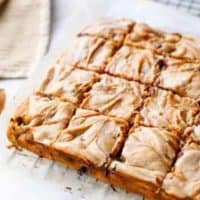 Weight watchers: 3pp each
PRINT SAVE go to your favorites
Serves: 16 bars

Storage: Bars should be stored in an airtight container, or on a tray/plate covered with plastic wrap at room temperature for about 3 days, or in the freezer for up to 6 months.