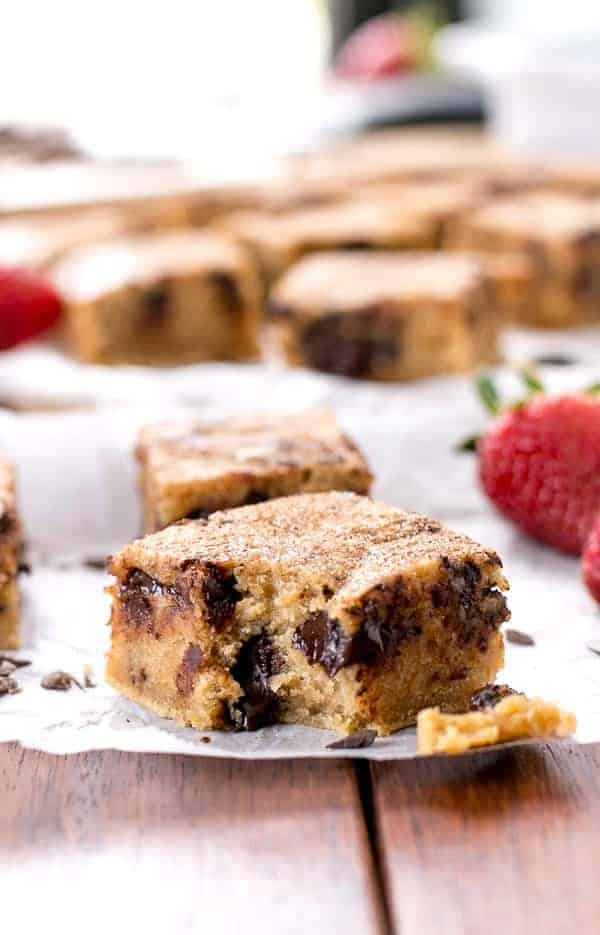 After the success of my Churro Cake….I was a-thinkin’…what comes close to a cake that I have pretty much a strong addiction and love affair with?

BLONDIES! I have such a passion for Blondies and their fudge dense and sweet flavour that I just had to re-make my Churro Cake – Blondie Style! 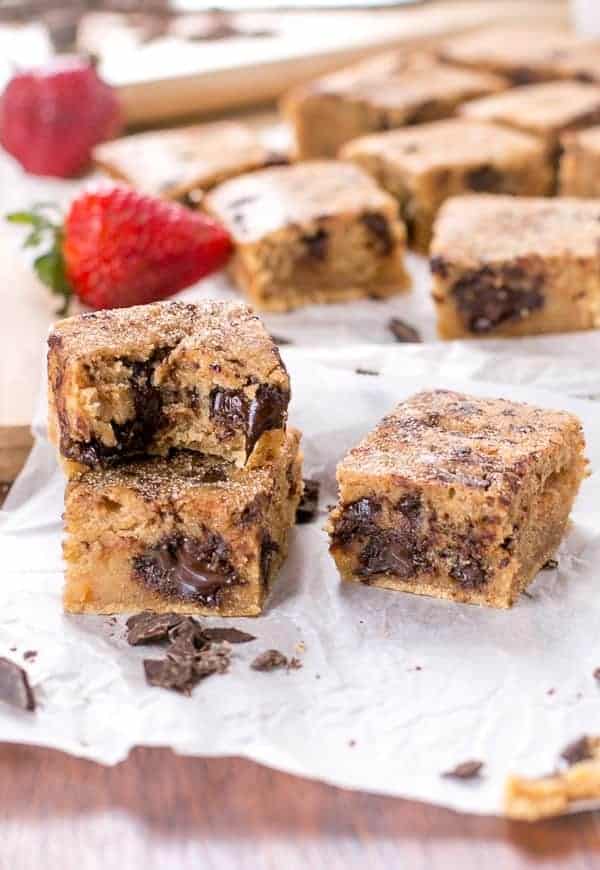 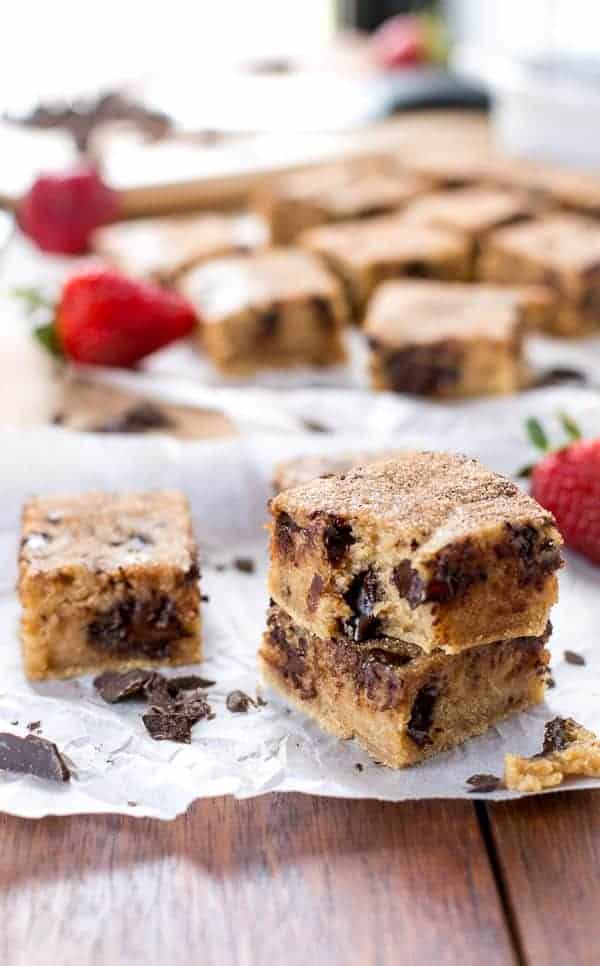 Not only do they have the beautiful and classic buttery, cinnamon-y and hint of vanilla traditional Churro flavour, they are so moist and fudge-y I couldn’t stop at one. I mean, who could? These are everything I wanted in a Blondie. Oh, let me rephrase.. a CHURRO Blondie.

The only difference of these from my Churro Cake is the melty chocolate chunks. Yep. I totally went there. 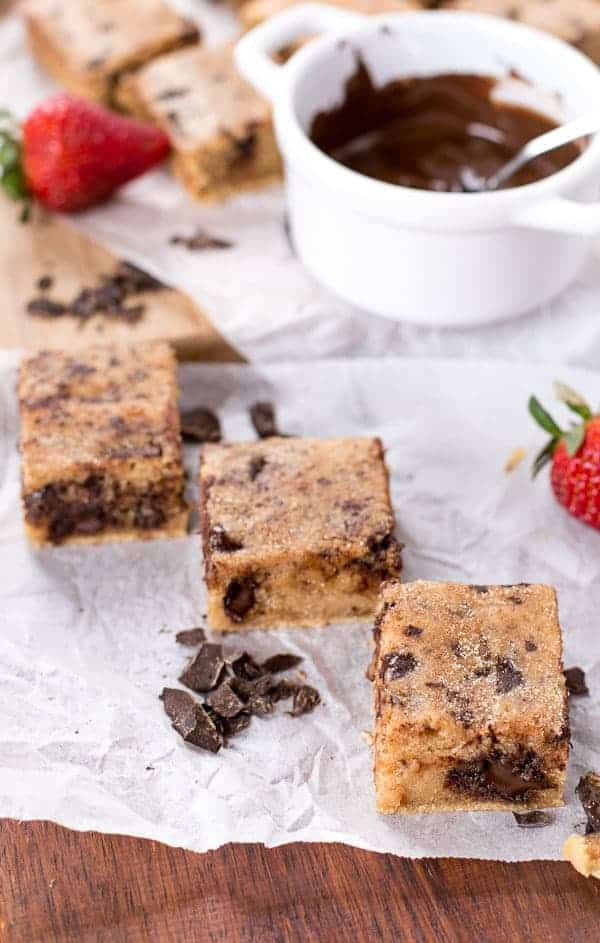 Because when I think blondes..I think chips. Or chunks. Anything with crunchy or melty pieces in them that ooze out with every bite and envelope around that dense sweet blondie texture.

Throw the cinnamon sugar on top, and this tray went ballistic. My house was a picture of chaos, with blondies being swiped left, right and centre. My kids devoured these in seconds — and…ummm…well I have a confession. I mayyyy have joined them on the kid level, and stuffed my face. I’m not gonna lie here, chocolate was smeared all over the place. And that’s the only was to eat these.

Cutting in to these, the knife was clinging to the texture with every slice. Don’t get me wrong, I don’t mind at all when that happens. Not only is that a slight hint that the blondies are every bit the dense and fudge texture I wanted…but I get to lick and scrape the knife with my teeth, that’s a gift. The gift of blondie magic. The best part. 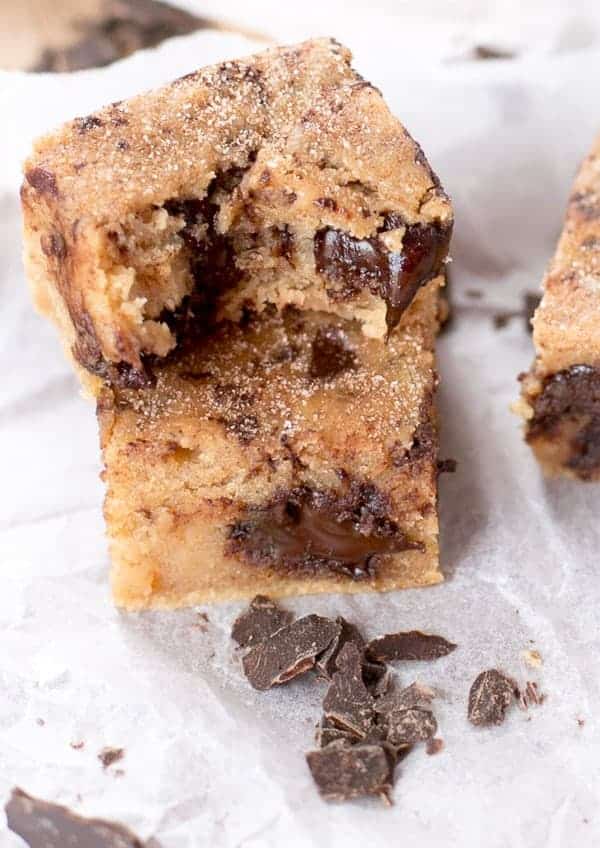 And taking a bite was like sweet nectar of Churro…

Everytime we go somewhere and there’s a Churro store, I need one. I gotsta have one. Or three. And the 400 calorie | 10g of fat (or more) per Churro, I can live without. My thighs hate me when I do it to them. Now, I have a supplement without trading the flavour. Am I happy? 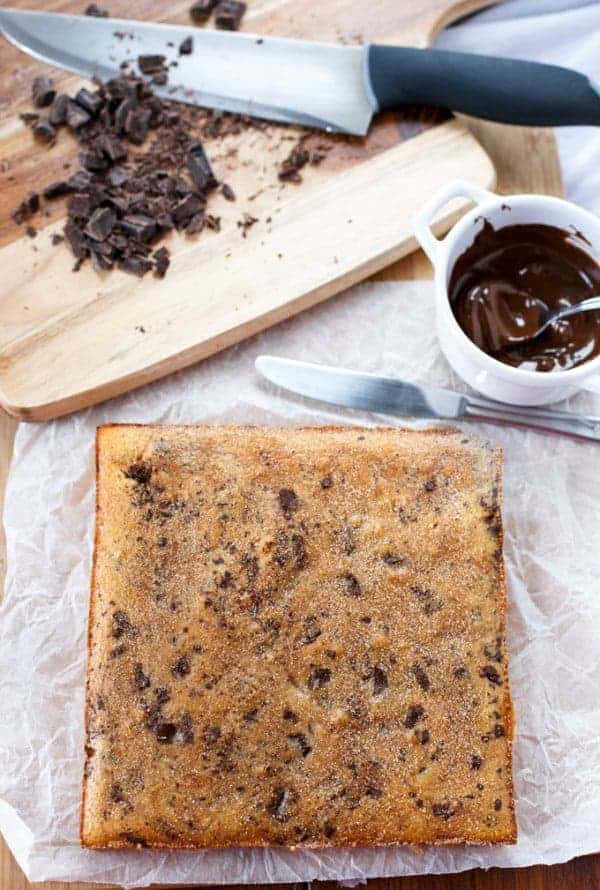 And chocolate sauce? To go with these? Well…I didn’t go there because I didn’t need too…HOWEVER, you could totally make these without the chocolate chunks and dip them in a clean chocco saaawce (recipe for that is on my Churro Cake page here) OR melty chocolate. It’s completely up to you guys! 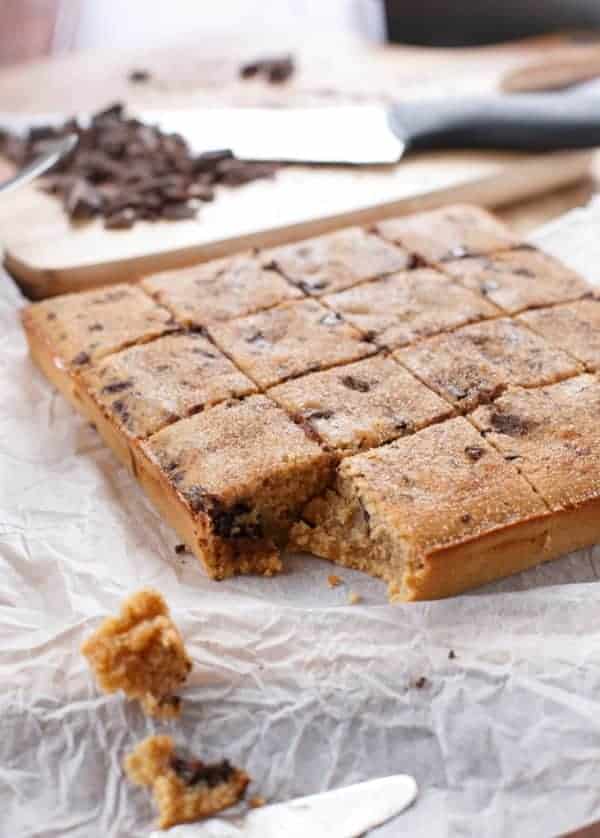 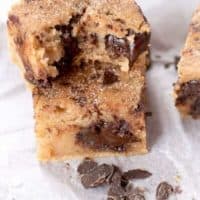 The beautiful and classic buttery, cinnamon-y and hint of vanilla traditional Churro flavour into a CHURRO Blondie.

Weight Watchers: 3pp per blondie!
PRINT SAVE go to your favorites
Serves: 16